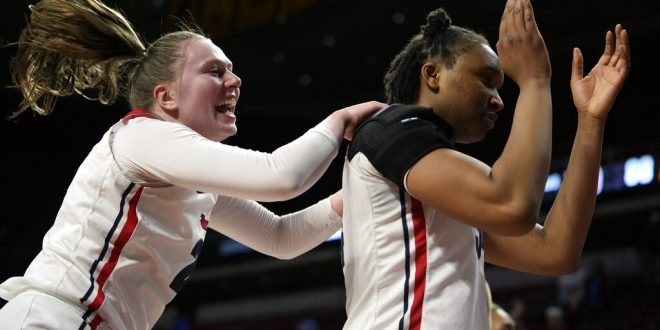 DePaul and Dayton shortly followed where Dayton was able to run away with it 88-57.

In a historical moment, the women’s tournament was able to start off with a field of 68 for the first time in history. The opening game did not disappoint.

In a tight matchup the whole way, Howard was able to pull away late in the fourth.

Behind massive performances from Brooklynn Fort-Davis and Krislyn Marsh the Bison were able to come out with the win.

Incarnate Word was led by Tiana Gardner who put up 16 points off the bench in a losing effort.

Howard’s next test will be tournament favorite and No. 1 overall seed, the South Carolina Gamecocks Friday at 2 p.m.

On a night where DePaul only had one player in double digits, Dayton was able to run away with this one by halftime.

Led by Erin Whalen who had a game-high 28 points along with seven three-pointers. Jenna Giacone also contributed with 21 points off the bench to help propel the Flyers to the next round.

DePaul’s lone scorer in double digits was Aneesah Morrow, who was able to put up 28 points in the defeat.

Dayton will next be in action in the round of 64 against the sixth seeded Georgia Bulldogs on Friday at 7:30 p.m.

Nonetheless, all teams will be cemented in history as the inaugural games of the women’s First Four.