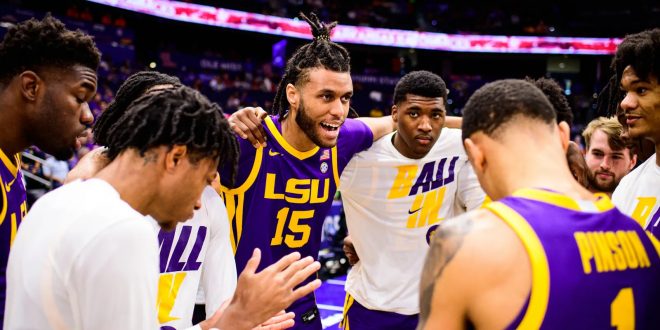 LSU huddles up during their SEC tournament loss to Arkansas. CREDIT: LSU Athletics

LSU matches up against Iowa St. in 1st Round of March Madness.

The sixth seeded LSU Tigers (22-11) travel to Milwaukee, WI, to play the 11th seeded Iowa State (20-12) in the first round of the NCAA Men’s Basketball tournament.

LSU enters the tournament off a swift 79-67 defeat in the SEC tournament to fourth seeded Arkansas. The Tigers had high pre-season hopes with transfer forward Tari Eason (16.9 PPG & 52% FG) helping bolster an already deep squad. However, their season ended with a .667 win percentage, and although they boast big wins against Kentucky and Tennessee, they’ve struggled to break into the top ranks of college basketball.

The recent firing of head coach Will Wade could be detrimental for Louisiana State, but there still is a lot of reason for confidence with Kevin Nickleberry as interim.

The Tigers find themselves ranked 19th in the country, according to Kenpom. The Bayou team has an adjusted efficiency margin of +19.10 and is ranked fourth in the country in adjusted defensive efficiency. At the sixth seed, they still have massive potential to shake things up in the midwest region.

Iowa State is one of the more peculiar teams of the tournament. They played relatively poorly in conference play but have multiple quad 1 wins including Texas, Texas Tech and TCU. Out-of-conference wins over Xavier and Memphis also help bolster the cyclones’ resume.

The cyclones did not end their season on a high note but have a strong squad that can create havoc for LSU. Guard Izaiah Brockington leads a lackluster offense in points and rebounds (17.2/7.1).

On the opposite side of the ball, the Ames team is ranked 10th in adjusted defensive efficiency. They stifle opponents on the three-point line by flying around the court.

Iowa State will look to drive aggressively and force its opponent’s defense to collapse before making an outside look. If the team can restrict turnovers, then the cyclones can catch the tigers off guard.

Interestingly enough, 6 seeds are 21-23 against 11 seeds in the first round since 2010. Additionally, teams who finished four games under .500 (ISU) in conference play are 4-0 in the first round of the tournament. For LSU, the outlook gets bleaker when considering that only one six seed has made the sweet 16 since 2016 (2021 USC).

Despite ESPN’s Basketball Power Index giving LSU a 72.5% chance to win the game, this one looks to be closer than expected.  The game spread sits at LSU -4, but don’t be surprised to see Iowa St. cover or win comfortably.