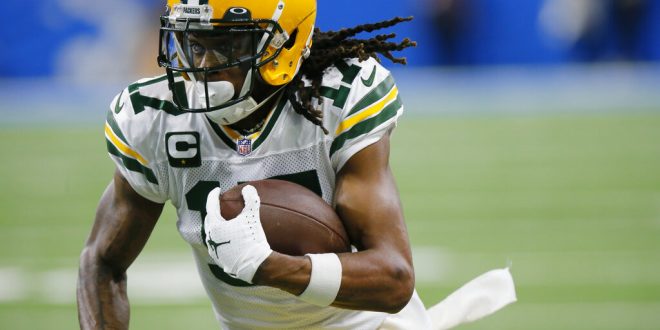 FILE - Green Bay Packers wide receiver Davante Adams runs during the first half of the team's NFL football game against the Detroit Lions on Jan. 9, 2022, in Detroit. The Las Vegas Raiders have traded two draft picks to Green Bay for All-Pro receiver Adams. A person familiar with the move said Thursday, March 17, the Raiders are sending the No. 22 overall pick in April's draft and another draft pick to the Packers to reunited Adams with his college quarterback Derek Carr. The person spoke on condition of anonymity because the deal hadn't been announced. (AP Photo/Duane Burleson, File)

In the first wave of the NFL free agency, many earthshaking trades and signings were made. Teams are slowly starting to realize what wholes they need to fill in order to prepare for the 2022 NFL Draft.

Salary Cap Analyst Brad Spielberger hones down on what is been going on during the free agency and how it can affect the teams moving forward.

The 2022 off-season has left us with quite a few unanticipated quarterback trades and signings. Tom Brady is unretiring and Aaron Rogers going back to Green Bay with a massive 4-year extension is only the beginning. With Jameis Winston to the Saints, Marcus Mariota to Atlanta, and Matt Ryan to the Colts, all eyes fall on Baker Mayfield. According to the Athletic, Mayfield had his eye on the Colts but that was quickly put away once they signed Ryan.

With fewer teams available by the day, not many options seem to be presenting themselves. Spielbergersbelieves the only choice that is left is the Seattle Seahawks.  He is not the cheapest option as he is owed $18.9 million. But there is another interesting connection between Baker Mayfield and the Seahawks.

Besides the Carolina Panthers, who are in desperate need of a quarterback, Baker Mayfield’s options are disappearing by the second.

Teams That Did it Right

When entering the free agency period, teams must evaluate what they need to improve on for the upcoming season. More times they do not they need to sign new players. But the key success is to sign the players you need without having an excessive amount of spending. The Los Angeles Chargers and Cincinnati Bengals managed to do just that

One of the big moves recently pulled by the Chargers was with signing pass rusher Khalil Mack.

The Chargers faced a rough season defensively, giving up 138.9 yards per game, the worst they have done since 2003. After missing the playoffs for the third season in a row, general manager Tom Telesco thought it was time for some changes. Taking an aggressive tactic to remake their defense, they have also signed three other defensive players. Including cornerback J.C. Jackson and defensive tackle Sebastian Joseph-Day. Brad Spielberger believes the Chargers hit the mark when recruiting these two players.

Fresh from their Super Bowl appearance, the Cincinnati Bengals are looking to improve their offensive in line.

Going up against the Los Angeles Rams, their offensive line faced a lot of pressure from the Rams. According to PFF, they finished the game with the third-worst team pass blocking grade in the 2021 NFL season (24.5). Although their work is still not done, the signings they made will massively improve their performance in the upcoming season.

The Green Bay Packers lost wide receiver Davante Adams to the Las Vegas Raiders. Leaving their star player, Aaron Rodgers, without his go-to wide receiver. Adams was a valuable player for the Packers and, this past season caught 123 passes for 1,553 yards with 11 touchdown receptions. Even though they are receiving their first and second picks, Spielberger believes they cannot just rely on it. They have to take the extra step.

In the 2022 off-season, many teams have made big moves in order to improve. Although things are far from being finalized, many teams are emerging as possible contenders for the playoffs with the decisions they have made.