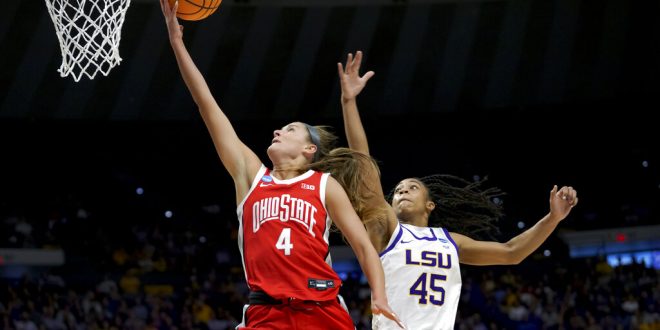 Ohio State guard Jacy Sheldon (4) shoots against LSU guard Alexis Morris (45) during the first half of a college basketball game in the second round of the NCAA tournament, Monday, March 21, 2022, in Baton Rouge, La. (AP Photo/Matthew Hinton)

This loss ended LSU’s season. This closer against Ohio State was LSU second loss in the last three games.

In the NCAA Women’s tournament matchup, Ohio State had 20 turnovers while they only caused 11 for LSU. The Buckeyes had 43 total rebounds in the game to help them win while the Tigers grabbed only 36.

Stand Out Players For LSU

At the guard position, and lead scorer, Khayla Pointer recorded 32 points with four assists and two rebounds in Monday night’s tournament matchup. That was the second highest total in her career as she led her team in hopes of victory. Also at the guard position, Jailin Cherry scored 12 points with two assists and three rebounds. At forward, Autumn Newby scored five points and grabbed 10 rebounds.

First year LSU head coach, Kim Mulkey, spoke about the season as a whole. She said she is happy about some of her team’s big wins across the year.

“One of my most enjoyable years ever in my career. You can see the impact that one program can have on an entire university.”

Year 1 of the Mulkey Era at @LSUwbkb was one we won’t forget for a very long time. pic.twitter.com/2pR7SdcQp1

For Ohio State, they will look to compete with the two-seeded Texas Longhorns in the Sweet 16 March Madness matchup on March 25. This will be a matchup to look forward to as we close in to the Final Four. 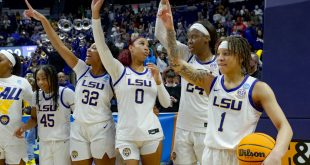 The No. 6 seed Buckeyes will face No. 3 LSU on the Tigers’ home court …