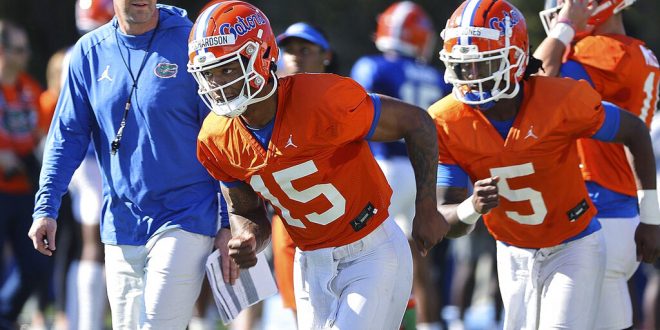 Head Coach Billy Napier and his staff are currently in Phase Two of his plan to rebuild the program. Napier is building the team’s identity.

Sometimes, there is a long adjustment period when a new staff comes in. Gouraige said that did not happen.

The offensive lineman said he connected with coaches Rob Sale and Darnell Stapleton pretty quickly. The coaches treated the offensive line to P.F. Chang’s to introduce themselves, he said. Now, the unit goes out to eat once a month.

Gouraige said his new coaches are funny guys who are always cracking jokes. He said he appreciates their ability to keep practice fun.

He said he knows he can go to Sale and Stapleton with anything.

He said that having multiple coaches keeps everyone on track. The team is focusing on the little things, he said. Thus, having multiple sets of eyes allows for more opportunities for the unit to improve.

Both coaches have emphasized the importance of watching film so mistakes are not repeated.

Gouraige is ready to do his part. He said it’s all about elevating the team’s game.

Napier said he wants the team to be faster this season. Gouraige explained how the last staff was more focused on being heavy upfront. He said that may have made the line sluggish at times. However, now the weightlifting coach is focused on speed, explosion and endurance.

Gouraige said this is the smallest he’s been in a while. He believes the new program is helping the team compete and get into game shape. Gouraige joked that he is chasing a six pack by the start of the season.

Trey is a third year sports media major at the University of Florida, and a WRUF reporter.
@@treyboogie5
Previous No. 6 Florida Are Set to Compete in NCAA Swimming and Diving Championships
Next The Golden Era has Begun As Florida Welcomes Mens Basketball new Head coach Todd Golden