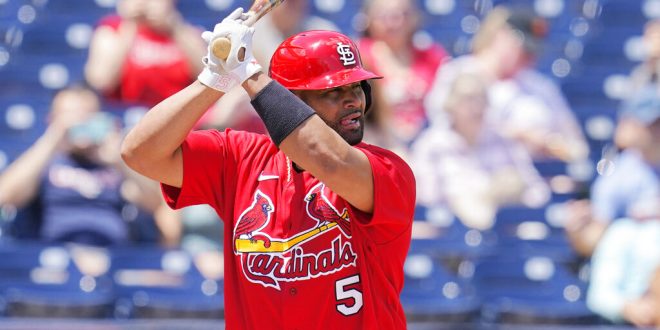 Albert Pujols To Start On Opening Day For 22nd-Straight Season

The 42-year-old slugger signed a one-year, $2.5 million contract with the St. Louis Cardinals on March 28 after electing free agency in November.

This will be Pujols’ last year in the majors, and it all comes full circle for him. He returns to the team where he became one of baseball’s biggest names and won two World Series championships.

This time, however, Pujols will take on a different role. He is expected to start as a designated hitter on Opening Day when the Cardinals host the Pittsburgh Pirates Friday at Busch Stadium.

We LOVE to see it! pic.twitter.com/r3G3svtPNg

If he makes the starting lineup, Pujols will tie Hank Aaron and Carl Yastrzemski for the second-most consecutive Opening Day starts with 22. The trio falls behind Pete Rose, who holds the record with 23.

The Cardinals will rely on Pujols mostly for situational hitting. This comes as the go-to move given that MLB approved the universal DH on March 10 and that Pujols still has some flame in his bat.

In 2021, he hit .236 with 17 home runs and 50 RBI in split time with the Dodgers and the Angels. The Cardinals could also use Pujols as a late-game pinch-hitter and an occasional reliever for first baseman Paul Goldschmidt.

At the end of the season, Pujols will close a career worthy of the hall of fame.

After being drafted by St. Louis in the 13th round of the 1999 MLB Draft, Pujols racked up ten All-Star appearances and three NL MVP awards. He also earned World Series titles in 2006 and 2011.

Pujols will rejoin close friend and catcher Yadier Molina and right-handed pitcher Adam Wainwright in what could be a “last dance.” The trio played essential roles in the 2006 and 2011 championships and will serve as the team’s leading veterans.

The Cardinals will start the season Friday against Pittsburgh at 4:15 p.m.