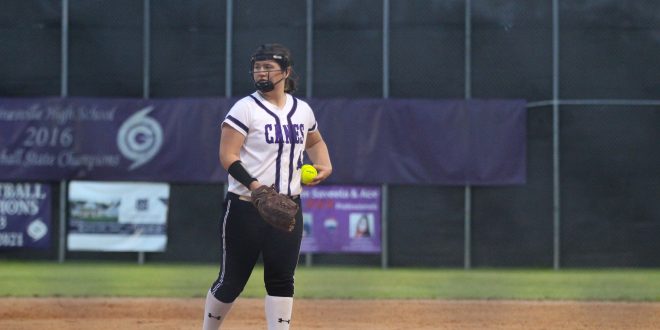 The Gainesville Lady Canes softball team tried to keep the Trenton Tigers from another win, but ultimately the Hurricanes couldn’t keep up with the tigers, ending with a 9-2 loss.

It took the Lady Canes the first few innings to get into their groove, leaving the Tigers to quickly take control of the game. Gainesville pitcher, Kyra Hornsby, seemed raring to go after the first inning of warming up, but pitched perfect hits for the Tigers and lost control of the pace. A scramble for a loose ball turned the tables for the Hurricanes, giving Trenton their first run. After that, everything started going downhill for Gainesville. The Tigers stole two bases; Hornsby threw a walk, with the bases loaded, and Trenton’s #11 hit a home run that flew past the fence. And this was all just in the second half of the second inning. Standout centerfield, Jayla Clark, thankfully caught a lob to the outfield that helped end the Tigers’ runs.

A Game of Catchup

With a huge lead to catch up, 6-0, Gainesville started to work together in the third. With Kyra Hornsby getting a strike on the Tigers’ batter, the first and third basemen had a double play to rally to the end of the half. The Hurricanes started hitting their balls in the fourth but couldn’t quite get the runs they needed.

Hornsby seemed to get into her groove in the fifth but couldn’t quite get her strikeouts. It was a “game of almosts” with Hornsby getting two strikes followed by a ball, repetitively. Jayla Clark kept Gainesville spirits high and mighty with her consistency on defense and electric energy. She made a handful of difficult catches in the outfield and seemed to be the glue holding the team together. Clark got the team and crowd hype with her dancing and walkout song before her bat.

Gainesville Lady Canes finally got on the board as Karter Thorp hit a hard ball to midfield that got Elise Knopf a run to home base, changing the score to 1-9.

In the sixth, Braylin Cook got another run on the board for the Hurricanes but time was running out. With only one more inning left, the Hurricanes couldn’t pull together an underdog victory.

Looking ahead, the Lady Canes will travel to Forest High School on Thursday, April 7, in hopes to gain momentum in the mid-season. The Hurricanes will be ready to fight this Thursday after the game against Trenton.