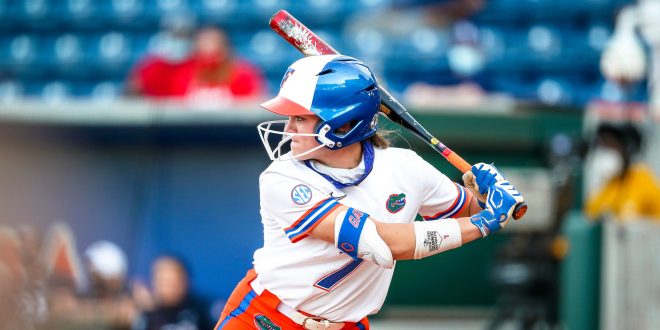 The orange and blue sit at No. 7 on the D1Softball Top 25 and USA Today/NFCA Division I Top 25 Coaches Poll. The Gators are riding a two-game win streak. They claimed the series over the Auburn Tigers, a conference opponent, last weekend.

The Florida squad clinched its third SEC series from the two victories in Auburn, Alabama. However, head coach Tim Walton said the team is competing its tails off. It still is not where it wants tfo be, he said.

But the season is not over. Walton said UF’s competitive schedule sets it up to continue to win softball games.

Walton said he hasn’t followed Florida State closely, however, he knows how good it is. The rivals both rank among the top in the country in fielding. Walton said the Seminoles pose to be a potential threat.

The Seminoles swept the Virginia Cavaliers in Charlottesville, Virginia, last weekend. It marked the third straight game where the squad’s offense scored multiple runs in the first inning against Virginia. And it looks to carry its momentum to Gainesville, Florida.

Florida State is 13-0 on the road as it heads to The Swamp.

The last time the foes met in early March of 2021, the Seminoles emerged victorious 7-2 in Tallahassee. However, the Gators claim the 28-18 series advantage historically.

The first pitch is slated for 6 p.m. at Katie Seashole Pressly Stadium.