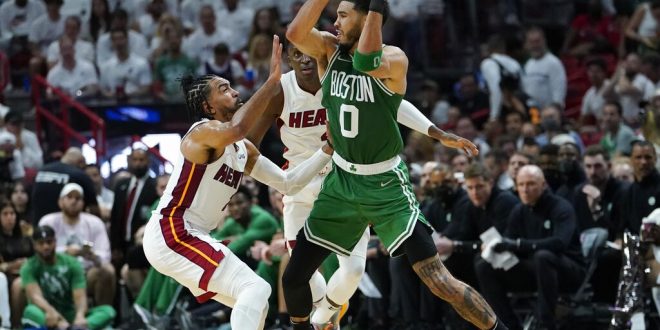 Boston Celtics forward Jayson Tatum (0) looks to pass the ball under pressure from Miami Heat guards Gabe Vincent (2) and Victor Oladipo during the second half of Game 2 of the NBA basketball Eastern Conference finals playoff series, Thursday, May 19, 2022, in Miami. (AP Photo/Lynne Sladky)

After an impressive Heat victory in game one, the Celtics responded with a dominant win in game two.

Celtics Even the Series

Following an embarrassing blown lead in game one, the Celtics had major improvements to make in game two. Some of these improvements came from center Al Horford and guard Marcus smart, who were both unavailable in game one. Horford shot 100% from the field on four shots. Marcus Smart had 24 points, while ending the game with a +/- of +31. Smart also added ferocious defense on Heat forward Jimmy Butler, who torched the Celtics when Smart was out in game one. Smart later mentioned that although Butler is tough to guard, it’s important to make the game as hard as possible for him.

How the Heat Can Win Game Three

Jimmy Butler has been fantastic in this series, as well as the entire playoffs. If the Heat are going to have a chance to reach the NBA finals, his supporting cast will have to help more. Miami’s presence in the paint, Bam Adebayo, has been nothing short of great on the defensive end. However, he hasn’t taken 10 or more field goal attempts since game four against Philadelphia last series. Also, although guard Tyler Herro has played well this postseason, his 11-point performance in game two cannot happen again if the Heat are going to win game three in Boston.

How the Celtics Can Win Game Three

If the Celtics are going to repeat their game two win, they will need another strong performance from Marcus Smart and Jayson Tatum. As Tatum started to get hot in the second quarter of game two, the rest of the team followed that momentum. Tatum finished the game with 27 points on 8-13 shooting. Guard Jaylen Brown also had an excellent game, scoring 24 points on 9-17 from the field. If the star guard play of Jaylen Brown and Marcus Smart continues, along with the shot-making ability of Jayson Tatum, the Heat will be in trouble.

The Celtics will play the Heat on Saturday, May 21 at 8:30 p.m. The game will be played in Boston at TD Garden.