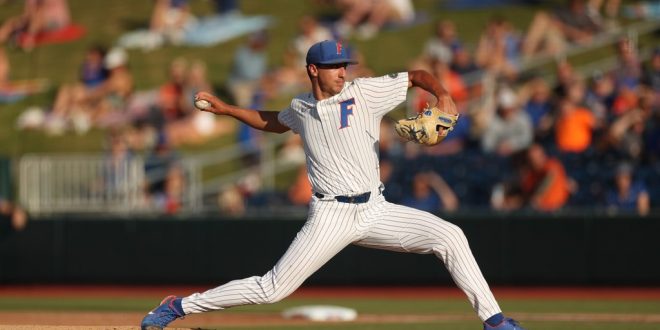 Florida Gator baseball started on the road to Omaha with a 7-3 win over Central Michigan on Friday night. Brandon Sproat pitched a seven inning outing allowing only one earned run. The Gators put eight hits on the board to take the victory.

Sproat pitched well in front of over 5,000 fans at Condron Ballpark.  In the first and second innings Sproat got into jams but escaped trouble.  But he allowed a run in the third and the Gators trailed going into the bottom of the inning.  Even though he gave up some hits and got into some jams, he was able to pitch out of trouble in every inning but the third.  Sproad struck out six and allowed nine hits and one run.

Ryan Slater entered the mound in the eighth to finish up the job. Within his short outing, Slater gave up three hits and two runs in two innings of work.

The first few innings of Florida’s Regional opener saw the Gators slowly waking up their bats and failing to capitalize on base runners. In the third inning, Central Michigan managed to open up the scoring with a single RBI by Danny Wustenfeld.

In the sixth, Jud Fabian walked and then was brought across home by Jac Caglianone when he doubled to right center. Caglianone added to his excellent day at the play the next inning with a two RBI single that brought the score to 5-1. Finally, the Gators cushioned their lead with a Colby Halter double to right center that brought two of his teammates home and put the score at 7-1.

Central Michigan lessened the gap in their final appearance at the plate when Wustenfeld brought in another runner with his ground out to short stop. The scoring finally settled with Aidan Shepardson when he brought in one last runner with a single to right field that left the score at 7-3.

The Gators are back at it Saturday night to take on Oklahoma at 7 pm in the winner’s bracket game.  Central Michigan and Liberty play at 1pm in an elimination game.