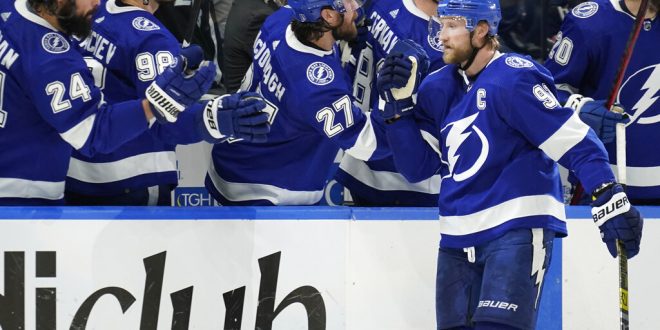 Lightning Win Both at Home

During the game Lightning seemed to have control over the rink from the beginning, Pat Maroon made the first goal within minutes of the game’s start.

Two of the team’s most popular players, Nikita Kucherov and Steven Stamkos, scored a goal a piece. This marked the third consecutive game where Kucherov scored a goal for the team. In addition to that, winger Ondrej Palat also scored a goal and had two assists.

Palat scored against goalie Igor Shesterkin, alone and ripped a low shot. Palat then made an exceptional pass to set up a clear path for Kucherov to score a goal. Early in the third period, Palat then got around Rangers forward Mika Zibanejad to skate the puck into the circle and made a shot. Shesterkin stopped the shop made by Palat, Stamkos then rebounded the failed shot into the net. Jan Rutta also made a contribution, Rutta had two assists in the game.

The Rangers could not figure out Lightning goalie Andrei Vasilevskiy, who saved 33 of 34 on the night. Rangers forward Artemi Panarin scored on a rebound with 3:33 remaining in the final period.

What to know before Game 5

Throughout the series, slow starts seem to haunt the Lightning, yet in game four they seem to make a comeback. Lightning now has a record of 8-1 for games at home during the 2022 postseason.

The Rangers average 4.2 goals in games at Madison Square Garden and 2.2 goals in away games–night and day. The two teams are now tied in the playoffs 2-2. The teams will face off again Thursday in New York for a tie-breaking game five.