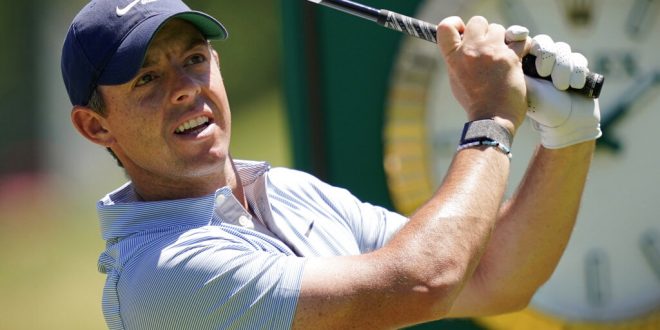 Rory McIlroy, of Northern Ireland, hits a drive on number 13 at The Country Club, Tuesday, June 14, 2022, in Brookline, Mass., during a practice round ahead of the U.S. Open golf tournament. (AP Photo/Robert F. Bukaty)

This year’s US Open will be the first major golf tournament since the formation of the Saudi LIV golf league. The LIV golf circuit has created an unprecedented amount of controversy in the golf world. This is largely because many PGA Tour golfers have defected from the PGA to join the LIV league. This has led to lots of tension among the golfers as well as the fans.

After deciding to stay loyal to the PGA Tour, Rory McIlroy spoke about players defecting from the PGA to join LIV Golf.

He first talked about players like Phil Mickelson, who are in their late 40s or even early 50s. These players are nearing the end of their pro golf careers, so it makes a bit of sense for players like this to leave for LIV now. The LIV golf circuit has fewer tournaments, so it’s less of a commitment for older players.

Then McIlroy pivoted and spoke about golfers close in age to him. He said that these players still have a lot of good golf left in them, and he doesn’t understand why these players are leaving the PGA Tour in the middle of their prime golfing years. He describes the move to LIV golf as “the easy way out”

Mickelson prepares for US Open amid controversy

One golfer who has been in the spotlight a lot lately has been 51-year-old, Phil Mickelson. He made major headlines when signing a $200 million contract with the LIV golf circuit. Since signing with LIV, Mickelson has been one of many golfers suspended indefinitely from the PGA Tour. He admits that he does not know what his future with the PGA Tour will look like.

Mickelson understands that his decision to go forward with LIV has created some strong emotions and upset many of his fans. He says that everyone is entitled to their opinion, and he respects the point of view of fans that are upset with him. Mickelson is grateful for his time in the PGA, but he is excited for his new challenge with LIV Golf.

Phil Mickelson received a lot of heat for his comments about the PGA Tour after his switch to LIV Golf. During his time with the PGA, there were lots of things Mickelson liked as well as lots of things he didn’t like. One regret Mickelson mentions is putting his comments out there publicly. In the future, Mickelson says he’ll keep those thoughts to himself regarding any governing body.

The US Open is June 16-19 at the Country Club in Brookline, Massachusetts. This year’s US Open will be the first time that PGA Tour golfers and LIV golfers will compete in the same tournament since the creation of the LIV Golf circuit.