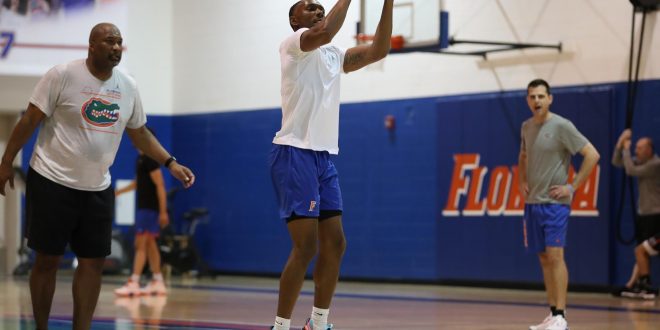 Photo by by Maddie Washburn, floridagators.com

Entering 2022, the Gators will have a new coaching staff led by former San Francisco head coach Todd Golden. After his hiring, Golden made it clear that he would look to the transfer portal to fill roster spots. Former St. Bonaventure guard Kyle Lofton is the fourth and, so far, the final transfer addition for the 2022 season.

Lofton joined Sportscene with Steve Russell to discuss his decision to transfer and life in Gainesville so far.

On May 13, Lofton signed with Florida as a graduate transfer following four seasons at St. Bonaventure, where he averaged 13.9 points per game and 5.2 assists per game.

Lofton said the situation at Florida with the new staff led him to sign with the Gators.

Lofton joins former LSU forward Alex Fudge, former VMI guard Trey Bonham and former Belmont guard Will Richard as the four transfers Golden brought in for his first season. Additionally, seven of the team’s 14 players are transfers from other schools over the past three years. The Gators currently rank eighth in 247Sports’ Transfer Basketball Team Rankings.

Another factor that played in Lofton’s decision was getting to play in the SEC. Mainly, the opportunity that the SEC provides for guards to make it to the NBA was too good to pass up.

Prior to enrolling at Florida, Lofton tested the draft waters by “declaring” for the NBA Draft while entering the transfer portal. He kept his eligibility by not signing with an agent. He eventually withdrew from the draft after signing with Florida.

What Kyle Lofton brings to the table

A four-year starter at St. Bonaventure, Lofton brings experience to the Gators with over 100 starts under his belt. Loften describes himself as a team-first guy with high energy.

In his four years at St. Bonaventure, Lofton etched his name into the record books after finishing third in school history for assists (604), seventh in steals (181) and 13th in scoring (1,613 points), according to his bio on the Bonnies’ men’s basketball website.

With all the memories at St. Bonaventure, Lofton said he has no regrets and hopes to make similar memories with the Gators.

Despite only being in Gainesville for a little over a week, Lofton said he’s enjoying his time with his new teammates and sees bonds being forged.

Lofton and the Gators began offseason workouts on June 6 and continue for the rest of the summer.