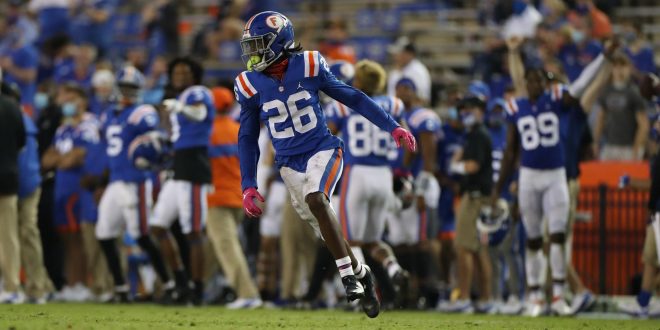 On Wednesday, Florida Gator defensive back, Kamar Wilcoxson joined Steve Russell on Sportscene to discuss his experience with the new coaching staff, NIL and more.

Wilcoxson is a redshirt freshman and former 4-star recruit out of IMG Academy. He was originally a 2021 commit, but reclassified to 2020 and signed with Florida. He appeared in two games his freshman year and logged three tackles and one fumble recovery.

Wilcoxson was set to be a much bigger part of the Gators’ plans last year, however a knee injury he suffered during a preseason practice ruined those plans. Wilcoxson’s injury forced him to have surgery, which led to Florida redshirting him in 2021.

Coming into the 2022 season, Wilcoxson is healthy and ready to prove himself to the new coaching staff. He has been very impressed with Coach Billy Napier and the rest of the staff. Wilcoxson pointed to their attention to detail and the way they focus on the little things.

Wilcoxson feels like this has been the best offseason in his three-year Gator career. He thinks that the structure put in place by Coach Napier is the main reason this offseason has been so successful. Wilcoxson has enjoyed putting in the work for the coaches, including co-defensive coordinator and safeties coach, Patrick Toney. He said that Coach Toney is “the best,” and has a different way of coaching than his positional coaches in the past.

In the past two years, there has been a big focus on name, image and likeness deals in college football. There are plenty of players who have profited greatly from these deals while there are others who have yet to reap the benefits.

Many of the players who have made money on these deals are the ones advocating for it and the ones who haven’t are much less inclined to promote it.

Wilcoxson has some very strong views when it comes to college athletes being paid because of NIL. He thinks it is good that these players will be able to make money off their NIL. However, he believes it may start to create some tension in the locker room. If some players are getting paid while others are not, Wilcoxson thinks locker rooms may get divided.

The Gator defensive back is very confident this won’t be an issue at UF because Coach Napier is “handling it really well.” He knows that Florida’s locker room has a tight knit group of guys who won’t let this money get to their heads.

Many college student athletes are so focused on their sport, they forget to focus on life off the field. Kamar Wilcoxson is not one of these people. Wilcoxson is majoring in psychology at the University of Florida, and has put a great deal of thought into his life after football.

The redshirt freshman hopes to become a mental health counselor after his playing days are over.

Wilcoxson was very open about his struggle with mental health since his injury in 2021. Because of the knowledge he now has, Wilcoxson hopes to help others who are going through the same thing he did.

Wilcoxson continued talking about the mental health of college athletes.

He eluded to the fact that fans don’t know what the athletes go through on a daily basis for the entertainment of others. He stated that “the average person won’t even understand the obstacles we have to go through to put out the product that everybody sees.”

Because of his struggle and his past, Wilcoxson is excited to help others once he hangs up the cleats.

Hugh is a second year student majoring in Journalism: Sports and Media at the University of Florida.
@HGreen_15
Previous Sean Kelley Hired as New “Voice of the Gators”
Next ESPN’s Laura Rutledge Talks Current Events Around the CFB and NFL World