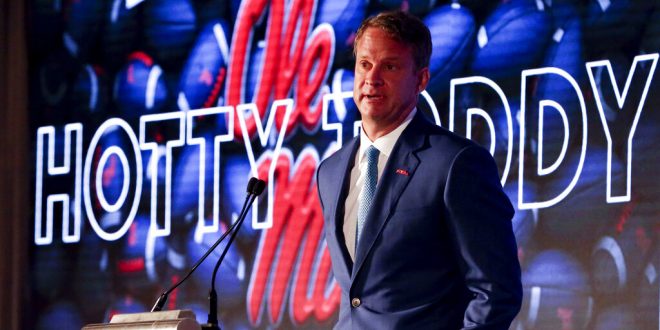 SEC Media Days kicked off Monday and Lane Kiffin shared his thoughts on the upcoming season. With the loss of star quarterback Matt Corral, the Rebels are looking to fill big shoes this season.

In Kiffin’s second season as head coach in 2021, Ole Miss secured its first 10-win season since 2015, doubling the number of wins from the previous year. A three-game win streak mid-season featured victories over No. 13 Arkansas, Tennessee and LSU. The Rebels’ signature win on the season came on a cool November night in Oxford, MS against No. 11 Texas A&M. Ole Miss pulled out a 29-19 win over the Aggies.

The Rebels’ turnaround season in 2021 resulted in earning a spot in a New Year’s Six bowl game for the first time since 2016. Ole Miss fell to the Baylor Bears in the Allstate Sugar Bowl 21-7.

With the departure of key players such as Corral, and coaches such as former strength coach Wilson Love, Kiffin discussed how he’s had to “restart” his program throughout the offseason.

Kiffin shied away from numbers in his definition of success. Rather than focusing on wins and losses, the Rebels are looking to improve every day and develop as players on and off the field.

Kiffin elaborated on what he looks for in a quarterback, and it boils down to three critical things: timing, accuracy and decision-making. Overall, Kiffin looks for a strong leader who the team can rally around. However, Kiffin finds it essential for his quarterback to be skilled in those three specific areas for the team to find success.

Jaxson Dart, the USC transfer quarterback, has drawn comparisons to Corral. Kiffin emphasized that Dart has done a great job stepping into a new system, especially at a young age. However, Dart still has work to do to meet Kiffin’s high expectations for the quarterback position.

The Rebels face off against Troy in their season-opener on Sept. 3. Ole Miss hosts SEC foes Kentucky, Auburn, Alabama and Mississippi State in Oxford this season.