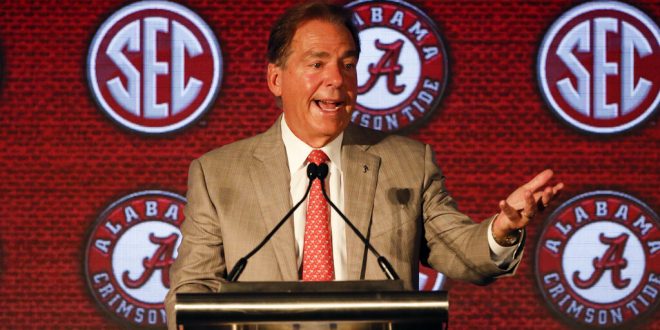 Day 2 of SEC Media Days rolled on Tuesday, and legendary Alabama Head Coach Nick Saban took to the stand to discuss the state of the Crimson Tide and their upcoming season.

Saban immediately addressed the challenge of establishing an identity and any sort of consistency when a program has a lot of turnover. Year after year, the Tide produces NFL talent, but with that comes a great loss of starters at the end of almost every season.

Nick Saban brings up that Alabama has had 113 players drafted since his arrival in 2007, including 41 first-round picks. ABR (always be recruiting)

Saban pointed to leadership as one of the keys to building consistency within a program such as the Tide’s, which saw seven players drafted in the 2022 NFL Draft.

He also specifically referenced the losses at wide receiver and on the offensive line. The Tide will be forced to replace significant talent in WR John Metchie III, WR Jameson Williams, and OT Evan Neal. Saban acknowledged the importance of rebuilding a talented group around Bryce Young.

“Quarterback is also a position that may be one of the most difficult positions in all of sports to play if you’re not surrounded by good people,” he said. “The challenge for us is to make sure that we do an outstanding job at developing the players around him.”

With the loss of defensive backs Jalyn Armour-Davis and Josh Jobe, Alabama will be forced to throw new players into those crucial roles.

No Dislike for Name, Image, Likeness

Saban was asked about his opinions on NIL and how it has impacted the Alabama program.

He also mentioned that the Tide made over $3 million from NIL deals just last year and shared his fondness for their success.

However, he did share that he felt there needed to be protocols in order for NIL to work. Specifically, Saban worries about whether or not fairness and competitive balance will be maintained.

“Name, Image and Likeness is not an issue for us at Alabama.”

Saban was also asked about the shift in the popularity of HBCUs and whether or not Alabama would ever consider adding one of those schools to their schedule. Other Power 5 schools have already begun to schedule these up-and-coming colleges and universities, most notably LSU which will play Southern University this coming season.

“I’ve always been an advocate of playing instate schools because I think it sort of helps them raise their level and their ability to compete,” he responded.

Saban’s response raised some questions across the media, as Alabama has not played an out-of-conference in-state opponent in almost 80 years. However, Saban’s comment suggests that a change may soon come for Alabama.

Alabama coach Nick Saban says he "would be very much in favor of" playing an in-state FCS school or HBCU.

Saban also addressed potential conference changes to the SEC and college football as a whole. However, he brushed aside talks of a “mega conference” of 18 or 20 teams as a hypothetical question.

Instead, he praised the addition of Texas and Oklahoma and emphasized the strength of the conference moving forward.