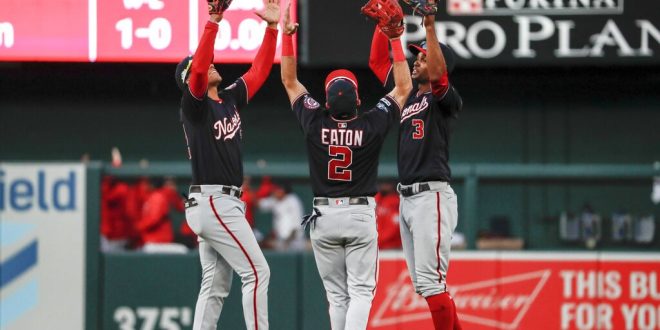 The MLB trade deadline is tonight at 6 p.m. ET. Once the deadline passes, teams won’t be able to finalize deals until the offseason. The deadline, which usually ends on July 31, was extended to Aug. 2 by commissioner Rob Manfred following the new Collective Bargaining Agreement between MLB and the MLB Players Association.

Firstly, the Atlanta Braves’ 2015 first round pick Austin Riley signed a 10-year, $212 million contract extension that includes a club option for 2033. The 25-year-old third baseman inked the largest deal in Braves history. Through 101 games played, he’s batting .301 with a .964 OPS and has 29 home runs. The defending World Series Champions have secured key players for the next few seasons. Riley, Ronald Acuna Jr., Matt Olson and Ozzie Albies are all signed through 2025.

The Atlanta #Braves today signed 3B Austin Riley to a 10-year contract worth $212 million: pic.twitter.com/TdPVtpYnL5

To Trade or not to Trade: Juan Soto

Juan Soto‘s future is one of the most pressing questions yet to be answered approaching the trade deadline. The Washington Nationals star recently became available after rejecting a 15-year, $440 million extension. The Padres, Cardinals and Dodgers have positioned themselves as the most likely landing options for Soto. It’s unlikely the Nationals will sign Soto to a pre-free agency extension. With no long-term agreement with Soto, the Nationals are better off maximizing his value in the meantime. ESPN MLB columnist Jeff Passan predicts Soto will soon be calling Los Angeles home.

Was this Juan Soto's last at bat as a Washington National? pic.twitter.com/FJjZA9Fxi7

The New York Yankees have been busy leading up to the trade deadline. The best team in the AL picked up Kansas City Royals outfielder Andrew Benintendi. The trade cost the Yankees three minor league pitchers in T.J. Sikkema, Beck Way and Chandler Champlin. This trade came after the Yankees signed all 20 of their 2022 draft picks, 15 of which are pitchers.

The Yankees also traded righthander Hayden Wesneski to bring in Chicago Cubs reliever Scott Effross. Effross has posted a 2.66 ERA through 47 games played. The rookie also has a 1.07 WHIP and 50 strikeouts. To cap off a newly-loaded bullpen, the Yankees obtained right-handed starter Frankie Montas and reliever Lou Trivino.

Additionally, Montas and Trivino were traded from the Oakland Athletics in exchange for second baseman Cooper Bowman and pitchers JP Sears, Ken Waldichuck and Luis Medina. The added arms will help the Yankees, whose injuries have impacted them heavily. ESPN MLB analyst Tim Kurkjian recapped the Yankees trades and successes.

With less than seven hours remaining before the trade deadline, teams are down to the wire to finalize deals. Will Soto be traded? Are the Cubs going to start selling? Are the Red Sox done dealing? All will be answered come 6:01 p.m. ET.