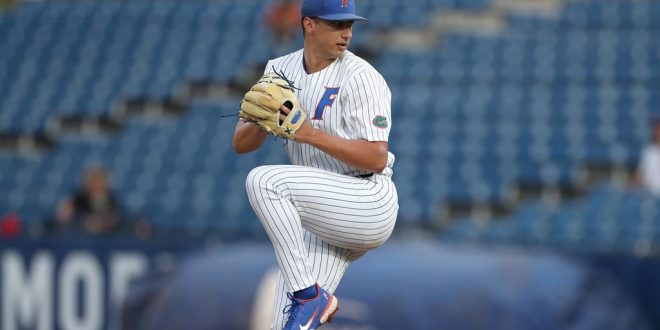 Florida Gators pitcher Brandon Sproat could make a return to Gainesville for the 2023 season.

The New York Mets drafted Sproat with the 90th overall pick in the 2022 MLB Draft.

However, the two sides failed to agree to terms on a contract before the August 1st signing deadline.

This is the second time an MLB team has drafted Sproat. He was drafted out of high school by the Texas Rangers in 2019, but honored his commitment to UF.

Sproat was a third-round MLB draft pick. However, many consider him to be a first-round talent.

Ace Hunter Barco’s season came to an early end due to Tommy John surgery. In his absence, Sproat stepped up as the team’s top starter. Following Barco’s injury, Sproat went 5-0, posting a 1.59 ERA and .218 opposing batting average in his final 6 starts of the 2022 season.

In the weeks that followed his selection, Sproat and the Mets could not reach a consensus when it came to what his contract value would be. The Mets could only afford to pay the Gators pitcher just under $900,000 without losing a first round pick in next year’s draft.

To put things into perspective, Hunter Barco signed with the Pittsburgh Pirates for $1.53 million. The 44th overall pick in the 2022 MLB Draft was also considered a first-round talent before his injury. While Sproat was drafted 46 picks later than Barco, the hard-throwing right-hander might have been drafted in the first round if he could have been more consistent.

Regardless, Sproat recognized that he was being offered significantly less than his former teammate, which ultimately caused contract talks to turn south.

Sproat now has the option to return to Florida for next season or to play baseball independently.

Although no decision has been announced yet, the 2023 season could be a special one for the Florida Baseball program.

With the addition of Southern Mississippi pitcher Hurston Weldrep and the return of Pierce Coppola, the Gators have plenty of arm talent at their disposal for this upcoming season.

Wyatt Langford, one of the top ranked prospects in his class, will lead the Gators’ lineup alongside Josh Rivera and B.T. Riopelle.

If Sproat decides to return, expectations would be sky high. The team hopes to return to Omaha for the first time since 2019.