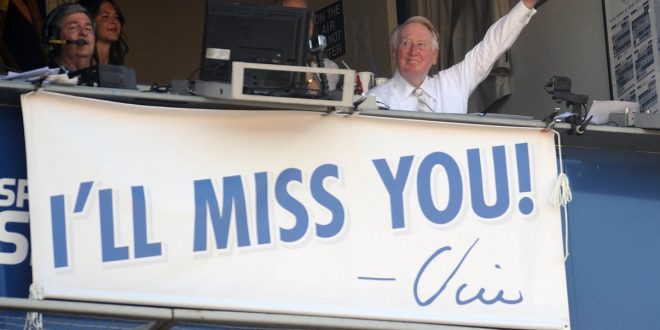 Vin Scully, who was the voice of the Dodgers in Brooklyn and Los Angeles for 67 years passed away Tuesday at the age of 94. Scully will be remembered forever as one of the most distinguished broadcasters in sports history. His calm, soothing voice is one that never be forgotten in the world of sports.

Scully was the longest tenured broadcaster with any one team in professional sports history. He was with the Dodgers for more than two-thirds of his life, and was able to announce some of the greatest moments in baseball history.

In the 67 years Scully worked for the organization, there wasn’t a game where Dodger fans didn’t hear this memorable introduction.

Scully started his career with the Dodgers organization in 1950 as he joined Red Barber on radio and television broadcasts. In 1953, Scully became the youngest person to ever call a World Series game at age 25. That year, Barber left the Dodgers booth and Scully took over as the lead announcer.

From 1953 to 2016, Scully was the main voice on Dodgers radio broadcasts and was loved by everyone around him. When he first started, Scully saw the era of Jackie Robinson and Pee Wee Reese in Dodger blue. He also saw legends like Sandy Koufax, Don Sutton, Orel Hershiser and Mike Piazza come and go from the organization.

On September 9th, 1965, Koufax tossed the eighth perfect game in Major League history. Scully was on the call for this incredible moment.

Scully also was behind the microphone for other memorable calls in other sports besides Dodger baseball.  He called 25 World Series, Barry Bonds’ record breaking 71st, 72nd and 73rd home runs in 2001, Hank Aaron’s 715th career home run, and Bill Buckner’s error that allowed the New York Mets to force a Game 7 in the 1986 World Series.

Scully’s storytelling and memorable voice was what got the baseball world through many tough times.

On September 17th, 2001, six days after the tragic events of 9/11, the Dodgers began a series against the San Diego Padres. Scully, of course, was on the call for this game and he reminded the nation of how they could start to get back to normalcy.

Some of the most famous players, coaches, and broadcasting peers have praised Scully for his impact on the game of baseball and the world of broadcasting.

MLB commissioner Rob Manfred said in a statement that “I am proud that Vin was synonymous with baseball because he embodied the very best of our National Pastime. As great as he was as a broadcaster, he was equally great as a person.” Manfred, along with many others around baseball feel this way about Scully.

He was one of the most well-known broadcasters in history for not only his comforting voice, but his loving heart.

Vin Scully will always be remembered, and his influence on baseball, broadcasting and the sports world will live on forever.

Hugh is a second year student majoring in Journalism: Sports and Media at the University of Florida.
@HGreen_15
Previous Gervon Dexter on the Upcoming Football Season
Next Soto, Bader, Among Names Traded Before Deadline