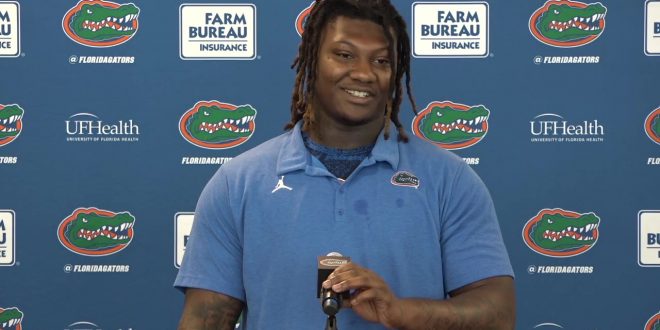 Gervon Dexter, star player on Florida’s defensive line, is prepared for beginning the 2022 football season with his teammates. Fall camp practices officially begin today, marking one month out from the first Gator game.

As media day comes to an end, it seems many good things are coming with fall camp underway.

In an interview from August 2’s media day, highly anticipated NFL Draft Pick Gervon Dexter received a plethora of questions on the upcoming season and the new HBC. Dexter had much to say about discipline and family during his time at the microphone with press.

After being asked questions about where the team has seen improvements, what new head coach Billy Napier brings to the team, and how fans should expect a shift in their game, Dexter had some inspiring answers to feed the press.

The defensive lineman says the main progression within the team is a bond that has been created. They all play for one another now, rather than for themselves. He states that his teammates and head coach are like a “family” now and will be moving with each other. As well, Billy Napier has brought much discipline to the team. Something the Gators lacked prior, Dexter says, and believe it will change their 2022 football season for the better.

Dexter also mentions the leadership ethic Napier pushes into them. He says Napier makes every single competitor apart of the Gator foorball team believe they can be a leader. No matter who the player is, their past, their feats, or what any mock draft says. Once every player steps onto the field they are all equal, strong, and leaders for the greater good of the team.

Gervon Dexter and his teammates believe with the leadership and discipline instilled into them by Coach Napier, this Gators football season will be unlike any they’ve ever seen.

A 2022-2023 sophomore at the University of Florida, Madison is studying Journalism, Sports and Media, with hopes to one day become a reporter and journalist. Madison graduated from IMG Academy in 2021, where she competed as a student-athlete running Track and Field. Madison loves all things sports and all things Gators!
@@madiwalkerr
Previous Dolphins Lose Picks and Owner Amidst Tampering Allegations
Next Legendary Broadcaster Vin Scully Passes Away