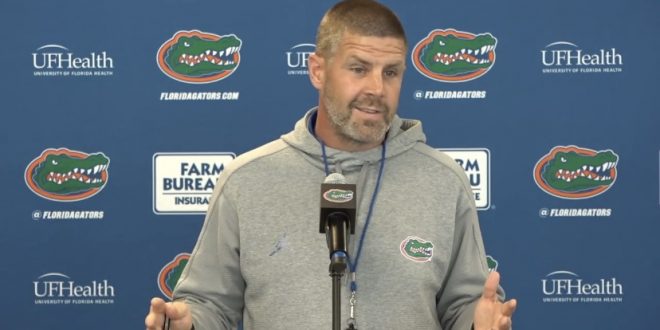 Coach Napier speaks to the media on day three of Fall camp. Photo courtesy of @GatorsFB via Twitter.

Florida football coach Billy Napier, running back Nay’Quan Wright, and safety Rashad Torrence II spoke to the media after practice Friday to talk Gator football.  Napier spoke on the initial progress he’s seeing with the team as well as his attention to detail. He also provided the first injury update for Fall camp.

Just ahead of day three of fall camp, the team is already showing how much progression has been made since the spring. Napier discussed the initial improvements the Gators are making relative to the chemistry of the team. “Yesterday we practiced at the efficiency and pace that we would like to be at,” Napier said. The players are becoming accustomed to procedures and protocols while establishing the discipline and unity that Napier envisions for the program.

While fans are concerned with how Florida’s season will end, Napier emphasized how his focus remains in the present.

Napier plans to implement a sense of urgency in the team so they can focus on the task at hand; reaching their full potential each day in camp.

“This group embraces physicality, they embrace toughness…they love to compete, you can sense that when you’re on the grass with them,” Napier said.

Napier’s attention to detail is instilling discipline top to bottom on the Gator roster. Napier further explained how his emphasis on detail goes as far improving each part of the organization, starting with each individual.

Wright was eager to highlight how Napier’s attention to detail is positively influencing the team.

While the joke about socks continues to spread, one thing’s for certain: discipline is no joke for this Gator roster. Torrence II explained how the structure under Napier is “amazing” because each day there is a set routine that eliminates any “gray area”. A player’s day is scheduled down to bathroom breaks, work outs, and snack time.

Torrence shared how despite the intensity of these schedules, they are eliciting a positive response from the players.

“It’s fun. I feel like if you came to Florida, everything should be fun. This is what you signed up for so there shouldn’t be a bunch of excuses,” Torrence said.

Napier provided the first injury update for fall camp on Friday. He said defensive back Jaydon Hill is currently unable to participate.

Napier spoke highly of  Wright, who is right on schedule to return from injury. Napier shared how Wright is one of the players that he respects the most on the roster.

Additionally, Napier said it was nothing major for offensive tackle Richard Gouraige on the injury front.  Gouraige and safety Dakota Mitchell are expected to be back soon. As far as defensive tackle Christopher Thomas’ return, Napier says the details on his eligibility issues will be kept “in house” but have been cleared up.

Ellie is a second-year sports and media journalism major at the University of Florida.
@ellie_shreve
Previous Left Tackle Tony Boselli Enters HoF
Next Dante Zanders Speaks on Graduation, Transitioning to Tight End and the Progression of the Team