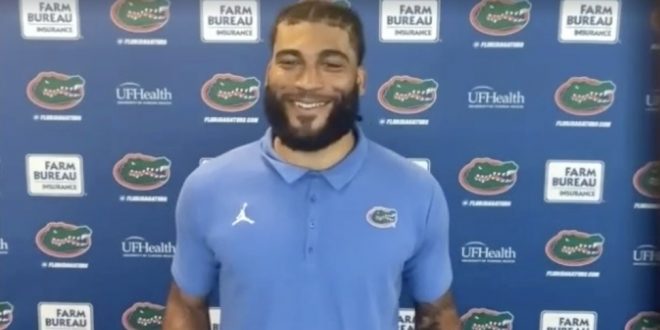 Dante Zanders is one of the many players on the Gator football team getting ready for the fall season.  He is also graduating, moving to tight end, and he also talked about the progression of the Gator offense, as well as who is standing out to him on the defensive side of the ball.

Zanders spoke via zoom due to graduation ceremonies taking place on campus over the weekend.  Zanders missed the previous day of camp on Friday due to his own graduation, where he graduated with a bachelors in Education Sciences. Zanders said it was a special moment for him as he became the first college graduate in the family.

Florida head coach Billy Napier gave the graduating players (WR Trent Whittemore, OLB Brenton Cox Jr and TE Zanders) the day off after the initial walk through. Zanders shared how nice it was to be able to spend time with his family and be surrounded by his support system. He also showed his gratitude for his high school coach, who gave him this chance.

The Transition Back to Tight End

After having previously played tight end and moving to defensive back, Zanders is now back in the tight end position. After losing Jonathan Odom, Nick Elksnis and Gage Wilcox to injuries in the spring, the Gators selected three players from the defensive side of the ball to make the switch to the offensive unit. Alongside Zanders are Griffin McDowell and Noah Keeter. The three have proven themselves in the position, allowing the change to become permanent.

During his sophomore year, Zanders transitioned from tight end to defensive end.

“I’m a team player, so I just say yeah whatever helps, whatever is best for the team,” Zanders added. He further explained how despite Napier being familiar with his time as a tight end, Napier could tell he had previously played the position by his speed and ability to bend corners that he showcased during the identity phase in early spring.

Additionally, after having the experience of playing on both sides of the ball, Zanders said he now has a better perspective as he returns to the offensive role.

Furthermore, Zanders is currently perceived as the top player in the unit. He shared how his initial concerns for playing tight end were that he had lost the agility necessary for the position. After gaining the weight needed to play defensive end, he had to slim down again to achieve the frame of a tight end. Zanders say he’s now “definitely better , stronger, faster” than before. He now sits at 255 pounds after dropping weight due to the heat at camp.

Meanwhile, some other tight end fresh faces include freshman tight ends Hayden Hansen and Arlis Boardingham. The hope is that through work and experience this unit will become a one that helps the offense get better.

Progression of the Offense

The explosiveness that quarterback Anthony Richardson brought to the Swamp last season is prompting high expectations for what the Gator offense can achieve in the upcoming season. Zanders explained how the best plays that fans have witnessed of Richardson actually happen regularly in practice.

“Everything y’all see in the games, we see every day in practice, more than once. He’ll do crazy things in practice like four or five times,” Zanders said.

With Richardson leading the offense, the team is truly under his guidance. Zanders added how everybody has put their faith in Richardson. Amari Burney joined Zanders at the press conference on Saturday and also spoke of Richardson’s ability.

Stand Outs on the Defense

Zanders spoke on the players he is consistently seeing stand out on the defensive side of the ball. He gave shout outs to Burney, Gervon Dexter and Brenton Cox. Zanders also explained how all of the defensive backs and the entire defensive line are performing really well at practice. He added how many of the young players have surprised him with how quickly they have been advancing during practice. He described how it was not a lack of consistency that hurt the defense last year but rather the lack of discipline.

Ellie is a third-year sports and media journalism major at the University of Florida.
@ellie_shreve
Previous Napier Talks Progress, Details and Injuries on Day Three of Fall Camp
Next A Look at the Gator Offense on Day Four of Fall Football Camp