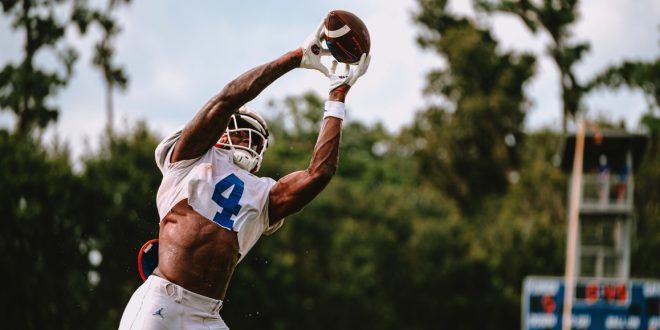 The Florida Gator football team returned to practice on Wednesday for Day 12 of fall camp to continue preparation for their first season under new head coach Billy Napier. The Gators again took to the practice field under the sun for what could have been the hottest day of fall camp yet. Below are the observations and practice notes from Wednesday’s media viewing portion of practice with the biggest takeaways from both sides of the ball.

Backup quarterback Jack Miller III was absent for the second day in a row as he was not observed during Tuesday or Wednesday’s media viewing portions of practice.

However, on a more positive note, redshirt freshman QB Jalen Kitna made his return to practice on Wednesday after having missed eight days of fall camp due to a small procedure and undisclosed injury. Kitna was observed in a non-contact jersey not participating and watching practice from midfield.

Kitna’s injury combined with Miller’s absence means the Gators are down to just two quarterbacks on scholarships (Anthony Richardson and Max Brown). Walk-on Jack Anders joined the unit during Wednesday’s session. Also participating on the field were Richardson, Brown, and Kyle Engel.

Richardson to Whittemore
and Engel to Henderson pic.twitter.com/Bo5fXQ9efT

During Wednesday’s practice, several scouts were in attendance from the Chicago Bears, Pittsburgh Steelers, Seattle Seahawks, and Tennessee Titans. Pittsburgh’s scout was seen taking notes on Richardson’s performance during his reps

The Gators are definitely down in the receiving position. Ricky Pearsall remained in a non-contact jersey working with a trainer on the sidelines. Marcus Burke was seen wearing his regular jersey despite riding a stationary bike for the entire session.

Xzavier Henderson was back at practice on Wednesday and was fully participating after being absent from Tuesday’s session. Henderson has been performing well at fall camp, running crisp routes during his reps.

Richardson to Shorter and Engel to Henderson pic.twitter.com/LjfSNbkoAU

In addition to Henderson, Trent Whittemore and Justin Shorter are undoubtedly the strongest players in the receiving position. Throughout fall camp, the three have exhibited the most consistency.

Meanwhile, Ja’Markis Weston has been participating in drills the past two sessions after being out on Monday. Weston was observed in a non-contact jersey getting in reps during a routes-on-air drill.

The tight ends began the viewing period working with the quarterbacks before spending the majority of the session working on blocking.

The scout from the Steelers spent some time observing the tight ends after taking notes on Richardson.

In addition, freshman tight end Arlis Boardingham was observed in a non-contact jersey with a sling around his arm for the third consecutive day.

The running back unit worked with the quarterbacks on routes on-air. Nay’Quan Wright certainly stood out with an impressive catch on a pass from Richardson at the start of the viewing period. Wright continued to lead the unit through every drill of the session.

It is also worth noting that freshman Trevor Etienne has been putting up a strong performance during fall camp, as has Montrell Johnson Jr. who received a lot of praise during his reps on Wednesday.

Additionally, the scout from the Titans was seen watching the routes-on-air drills with the running back unit.

At the start of the week, Napier spoke about his growing confidence with the O-line. He also discussed the current competition for the position. “Practice 10 to 15 is going to be very competitive for our football team,” Napier said. He further explained how there are eight players he feels confident with, while the ninth and tenth spots are yet to be determined.

Additionally, offensive lineman Ethan White was absent from Wednesday’s media viewing portion of practice. White fully participated on Tuesday after being out for the team’s first scrimmage on Saturday.

Transitioning to the defensive side of the ball, Florida’s D-line was observed working hard with position coach Sean Spencer.  Spencer was demanding the group to be more “violent” during Wednesday’s viewing period.

The most consistent standout among the unit is certainly Gervon Dexter, who leads the group, going first in every drill. While the defensive line lacks depth, Tyreak Sapp, Chris McClellan, and Jalen Lee have been looking promising at camp.

The safeties were seen working with co-defensive coordinator and safeties coach Patrick Toney. The group focused on coverage identification with high-pointing passes. Among the standouts in the group were Kamari Wilson, Rashad Torrence II and Donovan McMillon. In addition, redshirt freshman defensive back Kamar Wilcoxson also worked with the group and confidently completed his reps, while receiving praise from Toney.

The inside linebackers began the media viewing portion of practice by working on chute drills with position coach Jay Bateman. Amari Burney and Ventrell Miller continue to lead by example. The two completed the drills first, while receiving praise from Bateman as they have all camp.

Miller was participating in drills with Bateman despite wearing a non-contact jersey for the third straight day. His injury is unknown but he has been fully participating at camp.

Meanwhile, outside linebacker Antwaun Powell-Ryland Jr. remained in the injury pit while Mike Peterson worked with the remainder of the unit. Other defensive players observed in non-contact jerseys were cornerback Jason Marshall Jr. and walk-on safety Javion Toombs.