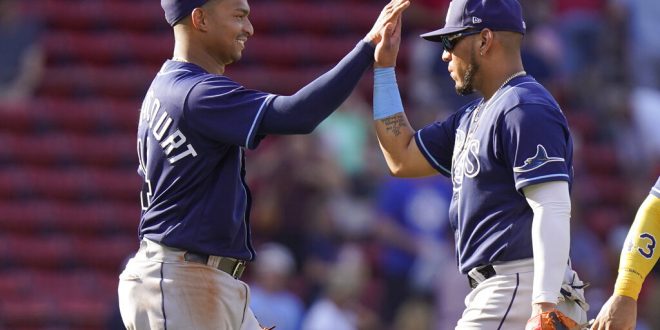 After tallying a season-high 12 runs Sunday and capturing their 70th win this season, the Tampa Bay Rays will travel south to Miami to face the Marlins Tuesday at 6:40 p.m.

The Rays had an off day Monday for the first time since Aug. 11, winning 12 of 17 games during that stretch. The Marlins have lost seven of their last 10 contests and come off a home-series loss to the first-place Dodgers.

In South Beach, Tampa will look to clinch the Citrus Series after they prevailed over Miami twice earlier this season at home. The in-state foes will play another two-game series beginning with Tuesday’s left-handed pitching matchup: Rays’ Shane McClanahan versus Marlins’ Jesús Luzardo.

Southpaws on the Hill

McClanahan is 11-5 this season with a 2.20 ERA — second in the American League — and a league-low 0.86 WHIP. In his most recent outing, McClanahan dealt six shutout innings and struck out nine batters including Angels center fielder Mike Trout on this 100 MPH fastball.

Luzardo is just 3-5 this year through 11 starts but boasts a 3.34 ERA and 1.01 WHIP. In his last start, the 24-year-old Peruvian threw seven innings in Oakland and showcased the movement on his breaking ball.

Every starter in Tampa Bay’s lineup Sunday produced at least one hit at Fenway Park against the Red Sox. Rays second baseman Isaac Paredes homered twice including this two-run shot over the Green Monster. Paredes leads the team with 18 long balls this season and will look to add to that total at LoanDepot Park in Miami.

Rays left fielder Randy Arozarena and designated hitter David Peralta each recorded three hits and drove in a pair of runs. Arozarena is batting .423 in his last seven games and has driven in a team-high 69 runs this year.

The Rays currently trail the Yankees by seven games in the American League East standings but sit atop the AL WildCard race. Tampa is half a game clear of the Mariners and one game clear of its division-rival Blue Jays. Entering the final month of the season, the Marlins are in desperation mode as they sit in fourth place in the National League East standings and remain 15 games out of the final NL WildCard spot.

Hi, my name is Griffin Foll and I am currently a senior at UF studying sports media journalism with a concentration in political science. I contribute weekly web and radio content for WRUF ESPN Gainesville and help cover the World Cup/Champions League soccer beat. Be sure to check out some of my recent articles!
Previous Volleyball Hosts its First Top-15 Matchup of the Season
Next Amari Burney talks 2021 miscues