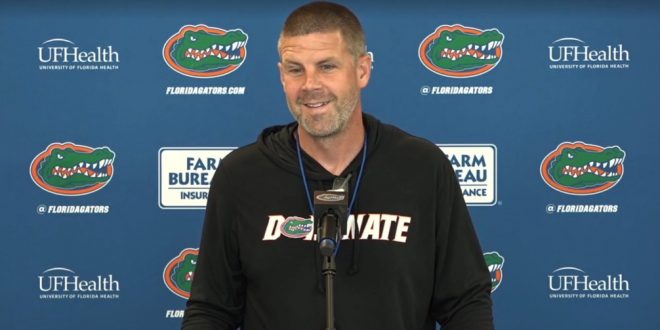 Gators Win In A Thriller Over No. 7 Utah To Start The Billy Napier Era

The Billy Napier Era for the Gators Football team is officially underway. The Gators pulled out a close 29-26 victory over No. 7 Utah.

The Gators started the season by receiving the kickoff and Nay’Quan Wright got the first play of the season. The ball was later fumbled which then led to a Utes touchdown.

The Gator fans were loud in the stadium and encouraged their team’s defense to make big plays, leading to a three-and-out for Utah. The Gators took it to the red zone on the following drive and went for a fourth down conversion. They achieved it which then led to their first touchdown of the season, courtesy of quarterback and first-year captain Anthony Richardson.

The game went into halftime with the Gators leading 14-13 after Anthony Richardson’s second rushing touchdown. This one was a huge 45-yard scramble.

Utah retook the lead late in the third quarter and went for the two-point conversion but did not get it. The Gators scored the third rushing touchdown of the night to go up 22-19 before Utah did the same to be up 26-22.

Late in the game, with 1:25 left, the crowd erupted in cheers when Anthony Richardson made it three on the night. He scored his third rushing touchdown to make the score 29-26 in favor of the Gators.

Richardson is great on his legs, but he does not discount the help he gets from the Gators running back room.

The game was not over until senior linebacker Amari Burney sealed the game with an interception in the end zone.

The First Win for Billy Napier

The Swamp packed in 90,779 fans for the 2022 season opener. That number is the 10th largest in program history, so it is safe to say they made a lot of noise.

Gator coach Billy Napier spoke at the postgame press conference about the impact the fans had.

Burney talked about what this win means for him and Napier with this new staff, but how the job is only starting.

Next, the Gators host the Kentucky Wildcats. Kentucky is currently ranked 20th in the nation and beat Miami (OH) 37-13.

Jensen Young is a journalism student at the University of Florida. He works as a sports writer for WRUF.com and is the voice of trendings on Wednesday mornings on the WRUF radio station.
@Jensen_Young9
Previous Dooley’s Grades (Florida vs Utah)
Next Florida Volleyball Falls to Minnesota in Four Sets