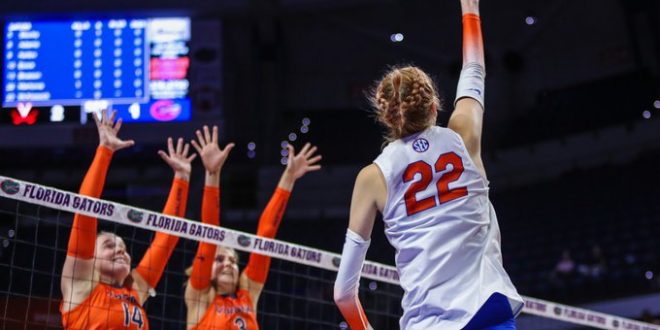 Marina Markova goes up for a kill in the Gators volleyball victory over the Virginia Cavaliers on Aug. 27. Photo from @GatorsVB on Twitter.

After an exciting four sets of volleyball, the Minnesota Golden Gophers defeated the Florida Gators on Sunday afternoon.

The first set of the match was a back-and-forth battle. To start the set, Minnesota gained control early and held the lead for the majority of the set. They were up 7-2 through the first nine scores of the game, but the Gators strongly fought back slowly. In fact, Florida regained the lead at 16-15. Unfortunately for Florida, this lead was short-lived as the Golden Gophers quickly took back control of the set, winning 25-22.

The Gators came back for revenge in the second set. They started off hot and never looked back on the lead. Florida was leading Minnesota by 10 points during the set, and easily cruised their way to a victory. The score was 25-17. Fortunately for Minnesota, they didn’t let this second set loss affect the next set. They came out strong in the third set, stayed composed, and won a very close set, 25-22.

In the fourth set, the Golden Gophers controlled the momentum the entire time. They led throughout the whole set and it wasn’t very close. They closed out the match with a 25-16 victory, winning the match by a score of three sets to one.

Throughout the game, it seemed like Minnesota was in control. Although the Gators won the second set in impressive fashion, the other sets were impressively won by the Golden Gophers. Some leaders for the Gators today were Marina Markova with 15 kills, and Alexis Stucky with 33 assists. For Minnesota, Melani Shaffmaster led the way with 35 assists, while Taylor Landfair contributed with 14 kills.

Previous Gators Win In A Thriller Over No. 7 Utah To Start The Billy Napier Era
Next Gator Soccer Suffers Tough Loss At Home to FSU