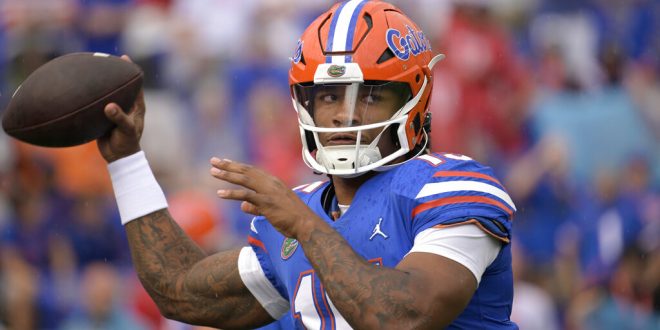 The Billy Napier era kicked off last week with a close 29-26 victory over the seventh-ranked Utah Utes. Following the victory, the Gators made their largest jump in school history in the current AP Top-25 ranking format. Florida started the season unranked but climbed to No. 12 in the rankings.

The SEC honored two Gators for their outstanding play against the Utes. Quarterback Anthony Richardson was named SEC Offensive Player of the Week, while Brenton Cox Jr. was named SEC Co-Defensive Lineman of the Week.

Richardson led the way with 168 passing yards, completing 17 passes on 24 attempts. In addition, the quarterback utilized his legs, rushing for 106 yards and posting three touchdowns on the scoreboard.

The Wildcats got their season rolling with a dominant 37-13 win over Miami University (OH). Kentucky was led by quarterback Will Levis, who threw for 303 yards and tallied three touchdowns in the victory.

• His fourth 300-yd game as a Wildcat and his fifth game with at least three TD passes.
• Became the 15th UK quarterback to throw for at least 3,000 yards, now with 3,130. pic.twitter.com/B2fryCHtXM

The Swamp provided a home field advantage like no other against Utah. Ben Hill Griffin Stadium was packed with 90,799 fans which was Florida’s largest home-opening crowd in school history.

The Swamp is once again sold out this weekend for the Gators’ matchup against the Wildcats.