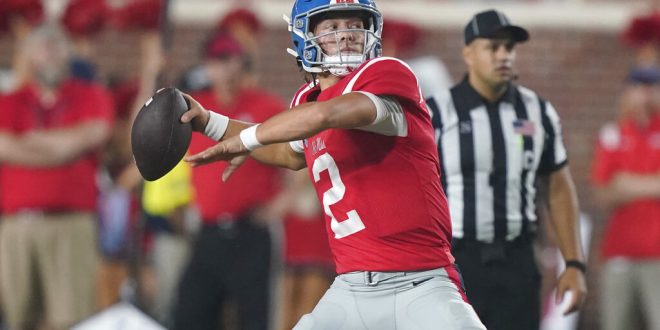 In the Rebels’ second game of the season, they took the lead early against Central Arkansas and never turned back. After just 15 minutes of play, Ole Miss was already winning by a score of 28-0. In the first quarter alone, wide receiver Michael Trigg had already caught two touchdown passes.

He ended the game with three touchdowns in total and made Ole Miss history in the process.

Michael Trigg becomes the first Rebel with three receiving touchdowns in a game since Elijah Moore did it against Vandy in 2020!#HottyToddy pic.twitter.com/snzdHd3H9l

After a loss to Clemson in week one, the Yellow Jackets knew they needed to redeem themselves with a week two win. In their matchup against Western Carolina, they came ready and won by a score of 35-17.  Georgia Tech was led by a strong effort from their quarterback Carlos Davis, who threw for over 200 yards to go along with two touchdowns. Their defense also held the Catamounts to just 100 yards passing.

How Can Ole Miss Win?

If Ole Miss is going to remain undefeated, one aspect they must continue to rely on is the stellar play of their runningback Quinshon Judkins. Through two games, Judkins is averaging eight yards a rush. After 87 rushing yards in week one, he followed with a 104-yard rushing game the next week.

How Can Georgia Tech Win?

The Yellow Jackets will need quarterback Carlos Davis to limit turnovers if they are going to beat Ole Miss. Through two games this season, he has thrown four interceptions. Although he does have eight touchdown passes, Ole Miss is a team that can capitalize on turnovers and turn it into points the other way.