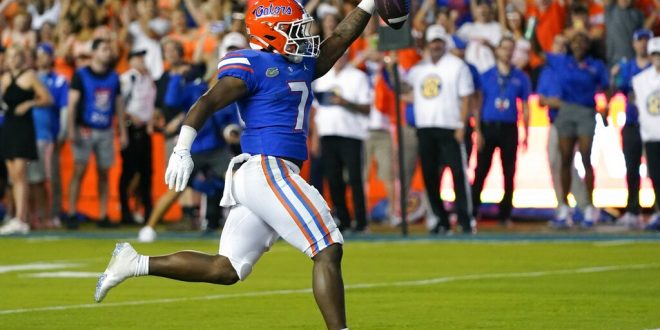 Florida running back Trevor Etienne celebrates as he crosses the goal line for an 11-yard touchdown run during the first half of an NCAA college football game against Kentucky, Saturday, Sept. 10, 2022, in Gainesville, Fla. (AP Photo/John Raoux)

The No. 18 Gators football team look to get back on track Saturday as they host the USF Bulls in The Swamp. Although both teams enter the matchup 1-1, Florida comes in as a heavy favorite. The line currently has the Gators as 24.5 point favorite.

USF Struggles Against the Run

The Bulls enter this game coming off a 42-20 win against Howard University. Although USF got the win, the scoreboard didn’t tell the whole story.

South Florida allowed 168 rushing yards against the Bison and also allowed a whopping 314 yards on the ground versus BYU in week one.

In order to tighten up their run defense, USF head coach Jeff Scott says the team needs to limit unnecessary mistakes. Especially when playing against stronger teams like BYU and Florida, Scott says mistakes get magnified against these types of teams.

After four seasons at Baylor, quarterback Gerry Bohanon decided it was time for a change of scenery and transferred to USF.

Coach Jeff Scott says the biggest thing Bohanon brings to this offense is his experience. After having success at a Big 12 school, Bohanon knows what it takes to win in college football.

In his first two games with USF, Bohanon has posted a 108.4 passing rating and has played well despite not throwing a touchdown for the Bulls. He hopes to throw his first touchdown pass of the season in Gainesville.

Gators Look to Get Back on Track After Kentucky Loss

Following their loss to No. 9 Kentucky, the Gators look to get back to their winning ways in their third straight home game.

Although it wasn’t the result they wanted, Florida head coach Billy Napier took his team’s loss to Kentucky in stride. He said the loss was “part of the story” and hopes the players, the coaching staff and himself can learn from the home defeat.

Instead of harping on his team after the loss, Napier decided to use this game as an opportunity for his team to improve. He stressed the importance of taking full advantage of challenges like this. Napier liked the way his team “sticked together” after the loss to the Wildcats.

The Gators and the Bulls are set to kick off at 7:30 p.m. Saturday in The Swamp. Last season, Florida cruised past USF 42-20 in Tampa.