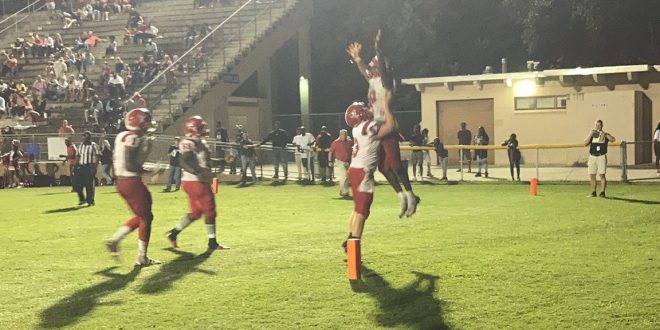 One week after weather suspended play against rivals Buchholz, the Eastside Rams were back at home, raring to take on the Bradford Tornadoes. Both squads entered the night 2-0, but it was the defensively dominant Tornadoes that left Citizens Field with a perfect record. The Rams put up a fight defensively but couldn’t figure out how to put up points tonight.

It was a chippy, highly emotional game for all sixty minutes. The first quarter was riddled with penalties, and the referees threw more flags than the quarterbacks threw passes. That’s a real stat. The Tornadoes cruised down the field to pick up seven early on and followed it with another touchdown drive capped with a brilliant catch by junior Chalil Cummings.

After the fast start from the Tornadoes, the game settled down a bit. Both defenses were good from the second quarter onward. Eastside’s big chance came at the end of the first half as they drove the ball down to the three-yard line. Unfortunately for the Rams, they couldn’t punch it in and turned it over on downs just before the half. The third quarter was rather uneventful, but another hard-nosed rushing attack saw Bradford extend the lead to 21.

Bradford scored again and effectively ended it early in the fourth, going up 28-0. An Eastside turnover on downs and one long Bradford drive later, and the clock hit triple zeros. The Tornadoes were clearly the stronger side all night, and their ability to win the battle of the trenches on both sides of the ball really showed.

Although it wasn’t particularly close, Eastside can take away some positives from this game. It looked like things were going to get away from them quickly in the first half, but the defense showed fight to stay in it. The offense continued to protect the football and didn’t turn it over all night. They also put a couple of strong drives together but never found paydirt.

What’s Next? The 2-1 Rams are off this week on a bye, and then it’s off to North Marion for their first away game of the year. The Broncos are off to a hot start, improving to an impressive 4-0 after beating Santa Fe tonight. In this matchup last year, North Marion came out on top 43-13, but this Eastside team is greatly improved. Coach Hoskins will rally his troops and look to upset the Broncos on the 30th. Bradford improves to 3-0 and will return home to play the Munroe Bobcats (2-1) next week.

The Hawthorne Hornets continued their excellent start to the season, moving to 4-0 overall after …