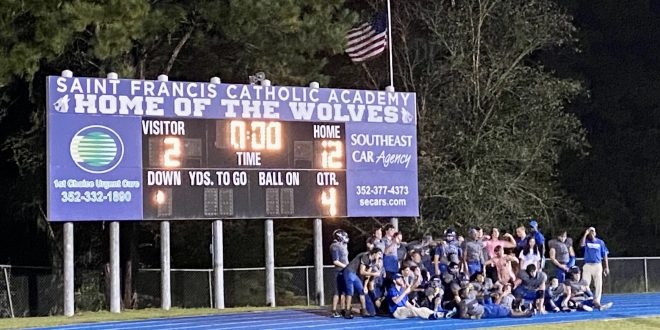 With a 12-2 victory over the First Academy Eagles, the Saint Francis wolves have won their first game of the season and the program’s first win in two and a half years.

It's official, Saint Francis Catholic Academy football is back! First win in almost 3 years (last previous win was back in October of 2019). Couldn't be more proud of my boys and my coaching staff. Let's keep it going now. Wolves football one of only 4 Gainesville teams with a W!

The keys to victory for Saint Francis were a strong defense and an amazing rushing attack. The defense shut down First Academy’s offense by forcing three turnovers and not allowing a single point. The Wolves’ running game was superb at moving the chains and keeping their offense on the field, dominating time of possession.

Saint Francis had an inspiring performance from their tight-end and linebacker Avi Steiner, sophomore, who caught and rushed for the game’s two touchdowns in the second quarter. Which propelled Saint Francis to a 12-0 lead at halftime. A lead that they were able to hold for the entire game.

I caught up with Steiner after the game and asked him what this win meant to him and the program.

“It feels great, we’ve been doing it for a long time. We’ve been waiting for this moment. We earned this from the start and we got this win.”

The Wolves’ phenomenal rushing attack was led by running back and linebacker Devon Rollins, junior, who was always able to make tacklers miss and give a spark the offense needed.

The stout defense was piloted by linebacker and tight-end Enrique Viana, senior, who lead the team with three and a half sacks. This phenomenal defense was able to get the crowd into the game with under three minutes left in the game. A turnover on downs from First Academy sealed the victory for Saint Francis.

New head coach has his team going in the right direction

Head coach James Langham spoke on what was done to make this victory possible.

“I think what it was is that we grew as a team and play to our level. We made mistakes, we stayed in it, it was accountability. Guys held each other accountable. That was the message this week, let’s be men. Men hold each other accountable, men don’t take it personal, and we don’t make the same mistake twice. We learn from it, we grow from it and then we continue to get better and that’s all you saw today.”

Saint Francis hopes to keep up this momentum. The Wolves face off against Seven Rivers Christian at home next week.