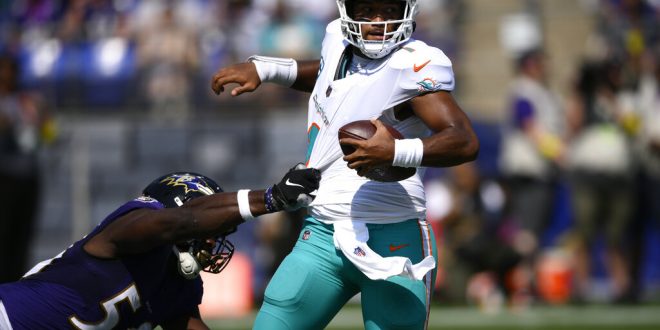 The Miami Dolphins welcome their division rival Sunday as they prepare to face off against against the Buffalo Bills. Both teams enter the game as one of the six undefeated teams remaining in the NFL.

In recent years, the Bills have owned their matchup with the Dolphins, rattling off seven straight wins against Miami. The last time the Dolphins beat the Bills came back in 2018 when Miami won 21-17.

Since Sean McDermott took over as coach of the Bills, Buffalo is 9-1 against the Dolphins. Bills quarterback Josh Allen is 7-1 against the Fins in his career.

When the teams met last season in Miami, the Bills trounced the Dolphins by a score of 35-0.

Not the Same Old Dolphins

Although Miami has struggled with the Bills in recent years, this is not the same Fins team.

Mike McDaniel’s career off to a decent start. Knocks off Bill Belichick and John Harbaugh.

In their comeback win against the Ravens, McDaniel turned to his playmakers to get his team back in the game.

Down 35-14 in the fourth quarter, Miami quarterback Tua Tagovailoa strung together four consecutive touchdown passes to power the Dolphins to a 42-38 comeback win over Baltimore. Receivers Jaylen Waddle and Tyreek Hill made history in that game, being the first pair of receivers on the same team to have 170+ receiving yards and two touchdowns in the same game.

Teammates to have 150+ Receiving Yards, 10+ Receptions, & 2+ Receiving TD in the same game in NFL history:

The Dolphins will be tasked with defending arguably the most lethal quarterback to wide receiver duo in the league.

In just two games so far this season, Stefon Diggs has compiled 20 catches for 270 yards and four touchdowns. Diggs ranks second in the league in receiving yards behind Hill.

In the Bills’ two wins against the Dolphins last season, Diggs scored a touchdown in each game. In Diggs’ five career games against Miami, he has only failed to catch a touchdown one time. Diggs will look to keep this trend going on Sunday as he should be defended by cornerback Xavien Howard.

Miami catches a break on Sunday as the Bills will be without two of their best defensive players. Safety Micah Hyde and defensive tackle Jordan Phillips are both listed as out for Sunday’s game.

Kickoff is set for 1 p.m. at Hard Rock Stadium in Miami.