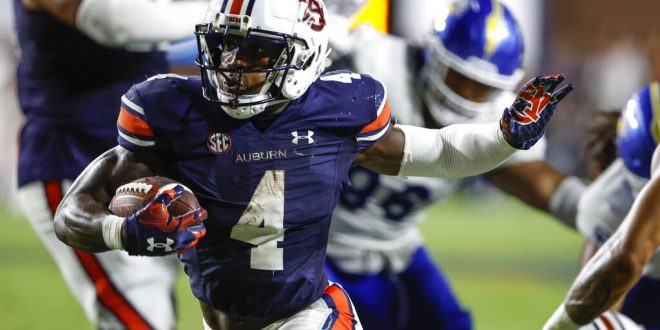 Auburn running back Tank Bigsby (4) carries the ball against San Jose State during the second half of an NCAA college football game Saturday, Sept. 10, 2022, in Auburn, Ala. (AP Photo/Butch Dill)

The Missouri Tigers travel to Auburn in both teams’ SEC opener. The game kicks off on Saturday at noon and concludes a week of homecoming festivities at Auburn. Furthermore, this is the first time Missouri has played at Auburn.

Missouri is coming off a 34-17 victory over Abilene Christian in week three. Sophomore quarterback Brady Cook led the offensive effort for the Tigers with 297 passing yards and 42 rushing yards.

Junior kicker Harrison Mevis secured his place in the record books as the school record holder for 50+ yard field goals made.

Auburn Looks to Bounce Back

Auburn started the season strong with back-to-back wins against Mercer and San Jose State. The season took a turn with a disappointing 41-12 loss to No. 14 Penn State on the Tigers’ home turf.

Anders Carlson nailed two field goals in the first half which was the only offensive action Auburn saw until the fourth quarter. Auburn broke down defensively in the third quarter, allowing two touchdowns and a field goal.

Auburn struggled to hold onto the ball as the Nittany Lions forced four turnovers. In addition, Tank Bigsby was held to only 39 rushing yards after posting 147 in the Tigers’ win over Mercer in week one.

The game is set to begin at noon on Saturday.

Shailey Klein is a second-year journalism major specializing in sports and media at UF.
@shaileyklein
Previous Breaking Down Juventus’ Recent Struggles On and Off the Field
Next Dolphins Host Bills in AFC East Showdown