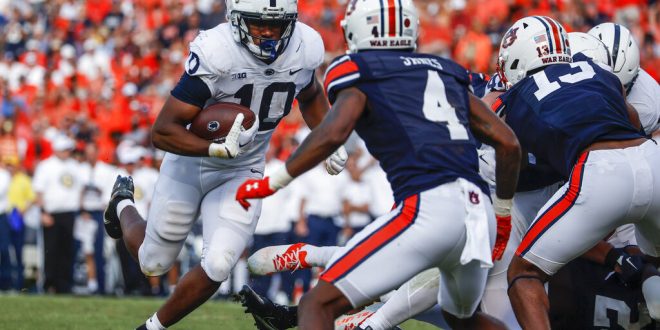 Penn State running back Nicholas Singleton (10) carries the ball in for a touchdown against Auburn during the second half of an NCAA college football game, Saturday, Sept. 17, 2022, in Auburn, Ala. (AP Photo/Butch Dill)

We all know about the Big Ten and SEC football divisions, but how do they compare? How do their top three teams compare?

The Big Ten, formerly known as the Western Conference and Big Nine, is the oldest Division 1 football conference in the country dating back to 1896. Between the East and West divisions, it includes 14 teams soon to have a total of 16 teams. The University of Southern California and the University of California, Los Angeles announced that they will be parting ways with the Pac-12 Conference and joining the Big Ten in 2024.

Over the last 10 years based on most wins, the top three teams in the Big Ten are:

Ohio State has a total of 121 wins currently. In the 2014 season, they had a record in the last 10 years with a total of 14 wins that season, they also defeated the University of Alabama in the Sugar Bowl 42-35. The win against Crimson Tide led them to play in the National Championship game against Oregon where they also won 42-20.

Penn State was just recently ranked number three, surpassing Michigan by one win. They have a total of 86 wins. The Nittany Lions had a record number of wins (11) in the last decade in 2016, 2017 and 2019. Penn State also has the second largest college football stadium with a capacity of over 106,000.

The Southeastern Conference has a total of 14 teams with two teams, the University of Oklahoma and the University of Texas at Austin, being added in 2025. The two teams were formerly in the Big 12 conference. Throughout the SEC they have seven teams between the East and West divisions.

Over the last 10 years based on most wins, the top three teams in the SEC are: