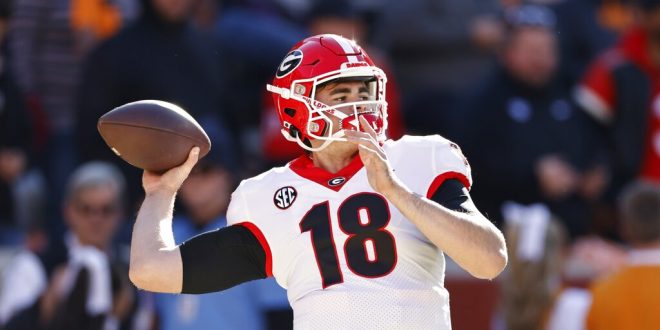 The No. 1 team in the nation travels to Columbia to take on the Missouri Tigers on Saturday. Georgia is 18-1 dating back to last year, including a dominating 4-0 start to the 2022 season. Missouri started strong against Louisiana Tech but has dropped two of their last three contests. Here’s what we can expect in this SEC showdown.

Much like what we saw last year, the Georgia Bulldogs are running over every single team in their way. Despite a slight hiccup on the road last week giving up 22 points to Kent State, Georgia has outscored opponents a whopping 169-32.

Stetson Bennett has looked sharp to start the year, while be it slightly slower than he finished last year. Nonetheless, the Georgia offense has looked explosive, especially with the tandem of Brock Bowers and Kendall Milton who lead the team in receiving and rushing respectively.

With a top-5 scoring defense nationally and a top-3 total offense in the SEC, Georgia is poised to make another run for the SEC championship and College Football Playoff.

Missouri hasn’t surpassed eight wins since 2014, and with their 2-2 start, they would need to put together a big winning streak to get back to that point. That could be difficult for the Tigers as they travel to Gainesville to take on the Gators in the Swamp after taking on Georgia, then proceed to face three ranked teams down the stretch.

If Missouri does hope to rejuvenate its program, it will need to find some more consistency from quarterback Brady Cook. The sophomore has struggled early in the season, throwing for just four scores but four interceptions to go along with that.

The running game has kept the Tigers in some of their games this year, as they are inside the top 50 in the nation in terms of rush yards. A dual-headed threat in the backfield with Nathaniel Peat and Cody Schrader has worked well thus far for Missouri.

However, it was the running game that handed them the overtime loss against Auburn last week, as Peat, Missouri’s leading rusher, fumbled heading into the endzone for the potential game-winning touchdown. Instead, the fumble was recovered by Auburn to end the game and send the Tigers to 2-2.

They will need Cook and Peat to step up and have flawless games against the Bulldogs in order to have a chance Saturday.

There is no hiding the fact that Georgia should dominate this game. The Bulldogs enter as 28-point favorites and have played like the best team in the nation through four weeks.

It will take perfect execution from the Tigers if they want to keep it close, and that includes both sides of the ball.

The Missouri defense might struggle to contain the explosive weapons of the Bulldogs. While they are top-5 in the SEC in total defense, the Tigers also rank in the bottom half of the conference when it comes to points allowed. They’ll need to flip a switch against a Georgia team with a plus 137 scoring margin on the year.

Mizzou DC Blake Baker on Georgia's Stetson Bennett: "He's like a coach on the field."

The Bulldogs did look a little rough around the edges last week against Kent State, which might just give the Tigers enough confidence to pull out an upset in Columbia.

Georgia and Missouri kick off Saturday at 7:30 p.m. on SEC Network.