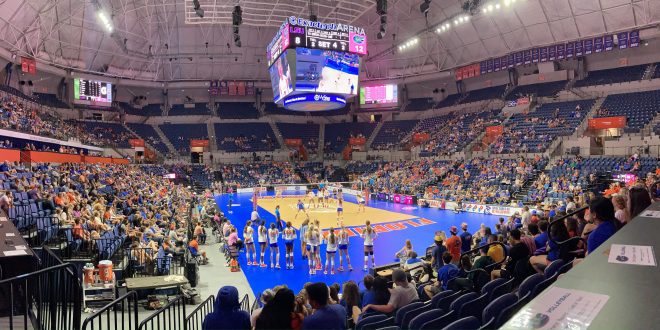 A crowd of 3,584 fans attended the Gators' SEC matchup against LSU on Oct. 8. (Jose Tovar/WRUF)

A roaring crowd of more than 3,500 people filled the seats of the Stephen C. O’Connell Center on Saturday. The loud cheering electrified the arena for a few seconds with every Florida point.

That noisy atmosphere reached new levels when Gators’ senior outside hitter Marina Markova got a pair of kills in the last set of Florida’s SEC matchup against LSU.

“The crowd was fantastic not just in numbers but enthusiasm and energy,” said Florida head coach Mary Wise. “It just had a great vibe to it, and it was such a good match.”

In the first set, the Gators met a fierce LSU defense and vice versa. Both teams traded high-caliber kills and blocks, leading to a fast 11-11 start.

Despite the close score, Florida built a 15-11 lead before both teams regrouped at the sidelines during a media timeout. After the break, the Gators kept their offensive momentum, outscoring the Tigers 10-7 to take the frame, 25-18.

UF dominated its opponents with 13 kills and three blocks while holding LSU to a .000 hitting percentage.

Florida came out firing in the second set with an early 6-2 lead. The Gators capitalized on unforced Tigers miscues and added two kills to build that advantage.

However, LSU mounted a 9-6 run to stop Florida’s momentum. From then on, both teams traded long and even exchanges, exhilarating the Florida faithful. The Gators held a 20-15 lead until the Tigers started a late 10-3 scoring run.

Florida tried to respond to LSU’s streak, but it wasn’t enough. UF junior outside hitter OC Fitzpatrick gave up the last point of the set after her serve hit the net.

It was an even set, with both teams posting similar stats. The Tigers had 16 kills to Florida’s 14. The Gators also registered three blocks and LSU two.

Florida bounces back to take the third set

The Gators began the frame by taking an 11-6 lead off the heels of solid net defense and effective kills. However, LSU responded with a 5-1 run to make it 12-11.

For the second straight set, both teams chased each other and stayed within at least two points. This time, however, the Gators held the Tigers at bay by building a 6-1 run with the score at 19-18.

Despite only getting nine kills in the set, Florida capitalized on seven total blocks to increase its lead. LSU had 11 kills but committed 12 errors, which led to a -022 hitting clip.

The Gators get the win

Like the second set, Florida struggled to close the frame by allowing LSU to go on late runs. The Tigers came back from an 18-12 deficit to tie the game at 23. After high pressure, Florida called a timeout that proved effective.

Following a thrilling exchange with a 23-24 deficit, the Gators took the set to extras with kills from junior outside hitter Sofia Victoria and Markova. LSU tied the match again on a kill by Anita Anwusi before Markova gave the Gators a second match point.

Curiously enough, the match was decided on a service ace in which two LSU players couldn’t secure the ball. In the final set, Florida posted a robust .531 hitting percentage with 19 kills on two attacking errors.