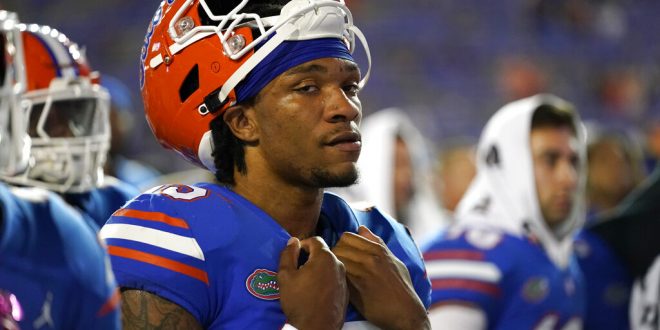 Florida quarterback Anthony Richardson gathers with teammates as the band plays the school song after Florida they were defeated by LSU in an NCAA college football game, Saturday, Oct. 15, 2022, in Gainesville, Fla. (AP Photo/John Raoux)

The Florida Gator football team (4-3, 1-3) had its comeback bid fall short in the fourth quarter as they fail to beat the LSU Tigers(5-2, 3-1), losing 45-35 on Saturday in the Swamp. This loss marks the fourth consecutive loss for the Gators against the Tigers, the first time that’s happened since 1977-80.

The Gators came out swinging on their first possession. They found themselves starting on their own 48-yard line after a 47-yard kickoff return by Trevor Etienne to begin the game. Shortly after this, Anthony Richardson connected with wide receiver Justin Shorter deep over the middle for a 51-yard touchdown. This put them in front 7-0 early in the first.

The Tigers responded with their own score after an impressive 12-play, 75-yard drive that ended with a passing touchdown to running back John Emery Jr. to tie the game up at 7-7.

On the ensuing possession, Gator running back Montrell Johnson Jr. would get his name on the scoring sheet. In LSU territory, Johnson Jr. busted through a hole for a 39-yard score to regain the lead 14-7 over the Tigers.

Following this blow by Florida, LSU would march down the field again to tie the game up at 14. And what looked to be a turning point for the Tigers turned into a turnover. After forcing a three-and-out for the Gator offense, LSU return man Jack Bech gave the ball back to Florida by muffing the punt on his own 13-yard line. Florida made sure to take advantage of this mistake with a one yard rushing touchdown by Montrell Johnson to push them in front 21-14. However, this would be the last score of the half for the Gators.

For the Tigers, they found the end zone two more times through the air before the end of the half. The first came on a 24-yard pass from Jayden Daniels to Brian Thomas Jr. to tie the game. The second one Daniels dropped in a 54-yard pass for Jaray Jenkins to give the Tigers a 28-21 halftime lead.

Gators cannot complete the comeback in the fourth

LSU began to run away with it in the third quarter. Their defense did not allow a single point and their offense capitalized off of this. They had two drives and two scores which pushed their lead to 42-21 over the Gators by the end of the third quarter.

For Florida, the closest they got to scoring was on their second possession of the quarter. However, they failed to convert on fourth down on the LSU 12-yard line resulting in a turnover-on-downs.

The fourth quarter went a whole lot differently for the Gators. They were able to score 14 unanswered points to bring them within a touchdown of the Tigers. The first of the two touchdowns came from an electric play by Anthony Richardson. On 2nd and 16 from Florida’s own 19, Richardson scrambled for an 81-yard touchdown.

The Gator defense did force a three-and-out on the next possession giving themselves a chance to bring it within one score. The offense made sure not to squander the chance. It worked its way down to the LSU one-yard line where Trevor Etienne muscled the ball across the goal line. This put the score at 42-35 in favor of the Tigers. Unfortunately for the Gators, this would be their last score of the game.

Although they thought they had the interception that could potentially see them tying the game, it was not to be as a roughing the passer call on Gervon Dexter Sr. negated an interception by Jason Marshall Jr. Ultimately, the Tigers would hit a field goal to seal the game at 45-35 over the Gators.

Thoughts from Billy Napier and Anthony Richardson on the game

Florida head coach Billy Napier began the postgame press conference by stating that he respects the fight from his guys against LSU. But, in the end, it falls on him for positioning the team to have success.

Additionally, Napier knows the rebuild at Florida is going to be a process and this is year one.

After Napier, came Anthony Richardson. As a team, Richardson knows a bye will give them a chance to improve upon recent performances.

And going into this bye week, players will take the time to improve on their game and Richardson has in mind what he needs to get better at.

Florida will next face the Georgia Bulldogs in their annual game in Jacksonville after the bye week; the Bulldogs also have a bye week.