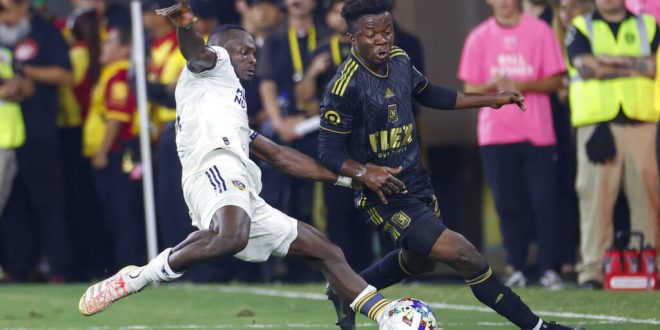 With the first round firmly in the rear-view mirror, the MLS Cup conference semifinals began Thursday with two matches. MLS’s version of the “Elite 8” began with a thrilling win in the City of Angels for Los Angeles FC over LA Galaxy and the Philadelphia Union defeating FC Cincinnati to advance to the conference finals. The round will conclude Sunday with CF Montreal taking on New York City FC and an all-Texas matchup between Austin FC and FC Dallas.

In front of a lively crowd of 22,305, Los Angeles FC got the scoring started early on with a 23rd-minute goal from Denis Bouanga. The Frenchman received a pass into the area and finished with his left foot in the top right corner from about 10 yards away.

Los Angeles FC nearly carried a 1-0 lead into halftime, but LA Galaxy’s Samuel Grandsir equalized in the 44th minute with a right-footed strike to the top left corner.

The game remained level for most of the second half before a flurry of goals were scored in the final 10 minutes. Los Angeles FC took the lead in the 80th minute when Bouanga struck for the second time. As Bouanga began his run into the six-yard box, a ground pass that slinked through three LA Galaxy defenders connected with his left foot, allowing him to easily tap in his second goal of the night.

LA Galaxy responded with a miracle goal from Dejan Joveljić in the 85th minute to tie the match at 2-2. The Serbian national flipped it in with a stellar right-footed shot from just beyond the 18-yard box.

It would be Los Angeles FC who had the final word. In the third minute of added time, in what was likely their final chance to score in regulation, a corner kick sailed into the area, was put on goal and blocked. Cristian Arango was there to collect the block just outside the goal and put it back into the net to give Los Angeles FC a berth into the conference finals. The No. 1 seed in the Western Conference will await the winner of Sunday’s Austin FC/FC Dallas matchup.

Thursday’s second match pitted the No. 1 seed in the Eastern Conference against a No. 5 seeded FC Cincinnati team that secured its first winning season and playoff berth in franchise history. the Union were able to keep FC Cincinnati off the score sheet in front of a sold-out crowd at Subaru Park. Philadelphia lone goal was scored in the 59th minute by Leon Flach. It was a superb finish for the Texas native, who lifted a misdirected pass with his left foot over the head of FC Cincinnati goalkeeper Roman Celentano and into the back of the net. Flach only scored one goal in the entire regular season, but he made his first playoff goal count.

FC Cincinnati did retain the majority of possession during the match but could not convert on any opportunities. Five of their 15 shots were on frame, each denied by Union keeper Andre Blake.

The Philadelphia Union will head to the conference finals to face the winner of Sunday’s CF Montreal-New York City FC tilt.

CF Montreal has never lost a home playoff game in franchise history, a streak of five in a row, while New York City FC have won four straight road playoff matches. The teams faced off twice during the regular season. New York City FC earned a 4-1 win at home in March before a scoreless draw in Montreal in July.

It’s a Texas showdown in the Western Conference Semifinals of the #MLSCupPlayoffs.#ATXvDAL | ESPN | Oct 23 at 7PM CT

No. 2 seeded Austin FC will host No. 3 FC Dallas in Sunday’s nightcap. Austin FC finished the season 16-10-8, with FC Dallas just behind at 14-9-11. Austin FC took down No. 7 Real Salt Lake last Sunday in the MLS Cup first round. The score read 2-2 after regulation ended, but Austin FC had the edge on penalties 3-1.

FC Dallas is coming off a penalty victory over Minnesota United FC Monday. Tied at one after regulation, FC Dallas won 5-4 in a shootout.

THE LEGEND OF ALAN VELASCO!!! pic.twitter.com/p39QyIjj8X 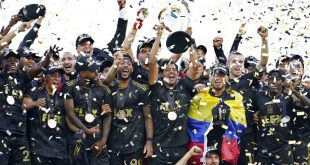