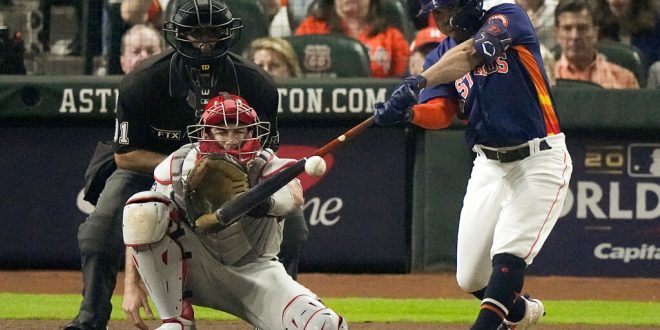 Houston Astros' Jose Altuve hits a double during the first inning in Game 2 of baseball's World Series between the Houston Astros and the Philadelphia Phillies on Saturday, Oct. 29, 2022, in Houston. (AP Photo/Sue Ogrocki)

The Houston Astros’ 5-2 win in Game 2 assured the Fall Classic is at least going to five and the series will head back to Philly tied Monday night.

Pound for pound on the mound

The Phillies are now set to find out as they turn the start to righty Noah Syndergaard.

Noah Syndergaard, of course, will be starting his first World Series game since this.

(He remains the only Mets pitcher in the last 22 years to win a World Series game.) pic.twitter.com/zsNqI2oXN5

Syndergaard has already made two appearances for the Phillies in October. In 5.1 innings, the 30-year-old has given up one run on three hits.

The Houston bats have already shown their prowess early as they barreled Zack Wheeler for three runs in the first inning of Game 2.

Dusty Baker will counter with a hardened Lance McCullers Jr. on the mound in his first World Series start since 2017. Furthermore, the veteran has made two playoff starts, allowing three runs over 11 innings of work.

The matchup will leave Ranger Suarez to Cristian Javier in Game 4.

After a couple of singles in Game 1 and a 0-for-4 Game 2, the wait for Bryce Harper continues.

A likely Hall-of-Famer, at the peak of his career, the man behind the NLCS swing, has yet to produce in the series.

For the Astros, an MVP in his own right, has been making waves in the World Series.

Where Harper has missed, José Altuve has struck for the Houston Astros.

Altuve has proved to be a spark plug for an Astros team that came out swinging in Game 2. Moreover, his double in the first, led to a three-run inning that proved the difference in what is now a 1-1 series.

The second baseman ended the game 3-for-4.

In postseason play so far, the Phillies have won all of their five home games when headed into the matchup tied a game apiece.

The Fightin' Phils are headed back home. Will they stay undefeated? #WorldSeries pic.twitter.com/5OfN6fflvZ

The Phillies come into the game having not trailed in a series this entire postseason.