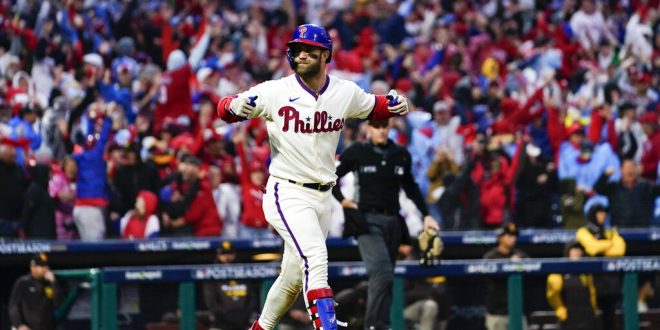 It has been a long and arduous road for the Philadelphia Phillies. Many counted them out, but they’ve proven their doubters wrong and are competing for a championship for the first time since 2009.

After starting the season 21-29, Philadelphia decided to fire manager Joe Girardi and the Phillies went on a tear beginning in June to finish 87-75 and earn the third wild card in the National League.

During their postseason run, the team has ended the seasons for the St. Louis Cardinals, Atlanta Braves and San Diego Padres. Now, they’re back in the World Series since losing to the New York Yankees in 2009. Philadelphia’s last title win came against the Tampa Bay Rays in 2008.

How the Phillies Shocked the Baseball World

It has been a remarkable turnaround for a Phillies team that has spent big money in recent years but has not seen any results. They came into 2022 with the fourth highest payroll in the league at $221.7 million and lofty expectations. Their rough start in the first few months of the season spurred a managerial change, with President of Baseball Operations Dave Dombrowski replacing Girardi with his bench coach Rob Thomson, who had never managed before at the major league level.

As soon as Thomson took over on June 3, the Phillies offense clicked, and their bullpen followed suit. The team finished the regular season on a 65-46 tear under Thomson’s guidance. Kyle Schwarber crushed 46 home runs and first baseman Rhys Hoskins hit 30. While Hoskins was a homegrown talent drafted in 2014, Schwarber was one of Dombrowski’s offseason additions, signing a four-year/$79 million contract in March. South Florida native Nick Castellanos inked a free agent deal with Philly over the offseason as well, agreeing to a five-year/$100 million pact three days after Schwarber. Those two high-powered bats joined an already potent lineup headlined by superstar Bryce Harper and All-Star catcher J.T. Realmuto.

Harper, who signed a 13-year/$330 million megadeal ahead of the 2019 season, has finally begun to fulfill the hype. The reigning National League MVP was hitting .318 when his season was thrown into jeopardy on June 25 after a 97 mph inside fastball from Padres lefthander Blake Snell broke Harper’s left thumb, requiring him to have surgery. He returned Aug. 26 and finished the year hitting .286 with 18 home runs.

On the mound, Philadelphia relied on their rotation of Aaron Nola, Zack Wheeler, Ranger Suarez and Zach Eflin. The four pitchers recorded a combined 3.44 ERA. Additionally, lefty Jose Alvarado and righthander Seranthony Dominguez proved to be weapons out of the bullpen with their triple-digit fastballs. While the Phillies lost 10 of 13 from Sept. 15-29, they performed well enough overall to clinch their first playoff berth since 2011 in Houston on Oct. 3.

Rebounding from their rough start to make the playoffs would have made the 2022 Phillies season a wild success in its own right, but their postseason ascension has made this year unforgettable. They were the sixth and final team to make the postseason on the National League side of the bracket and matched up with the NL Central Champion St. Louis Cardinals in the wild card series. Philadelphia took the first two games on the road to stun the Cardinals and advance to the division series.

Philadelphia’s next challenge was to slay their division rival Atlanta Braves in the NLDS. Philly narrowly took the first game 7-6 and escaped a three-run ninth inning Atlanta comeback. The Braves won game two 3-0, but the series shifted back to Philadelphia tied at one game each. The Phillies relied on early offense in the final two games and its stellar starting pitching to eliminate Atlanta. Harper provided two home runs in the final two games of the series, allowing his group to advance to the NLCS for the first time since 2010.

Facing the upstart San Diego Padres, who had just completed a David vs. Goliath series of their own against the Los Angeles Dodgers, the NLCS pitted underdog against underdog. The series began in San Diego with a tremendous outing from Wheeler. The Phillies starter went seven innings and allowed just one hit in the 2-0 opening win. Despite dropping game two 8-5, the series went back to Citizens Bank Park for three straight home games.

There must be some magic in the City of Brotherly Love, because the Phillies have not lost at home this postseason. The final three games of the series resulted in Phillies wins and the eighth pennant in franchise history. The key moment in game five came in the bottom of the eighth inning, with the Padres leading 3-2. San Diego reliever Robert Suarez surrendered a two-run opposite field shot off the bat of Harper to put the Phillies ahead by one.

Philadelphia recorded the final three outs in the following inning to clinch a World Series berth. No matter what happens in this year’s Fall Classic, that swing from Harper will live on in the hearts of Phillies fans for a long time.

OMG OMG WE DID IT WE'RE NATIONAL LEAGUE CHAMPIONS pic.twitter.com/0g3Jr4NMXT

Preparing for the Fall Classic

This Phillies-Astros matchup is a rematch of the 1980 NLCS, back when Houston was a member of the National League. Philadelphia took that series 3-2 and eventually won their first World Series in franchise history over the Kansas City Royals.

The Astros are the juggernaut of the American League, having swept the Seattle Mariners in the division series and the New York Yankees in the ALCS to reach their fourth World Series in six years.

Thomson announced Nola will get the ball to start game one Friday night. He will face Astros veteran Justin Verlander, who is playing in his fifth World Series. Nola appreciates the challenge of facing an opponent like Verlander.

Houston’s pitching staff has been among the best all season. The Astros team ERA entering the postseason was 2.90, second in the league behind the Dodgers. Thomson understands that the Phillies offense has their work cut out for them.

Thomson feels his team needs to stay in the moment if they want to keep the same chemistry that has powered Philly’s postseason performance.

Game one of the 118th World Series will begin at 8:03 p.m. ET at Houston’s Minute Maid Park. FOX will televise all games of the series.