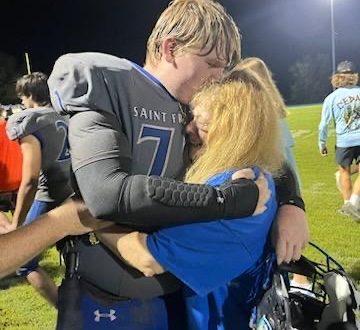 Dalton Dean and his Grandmother Pasty Baker hugging after a game

FEATURE: Dalton Dean and His Grandmother Have a Relationship Like No Other

The whole house showed character. Each room was decorated in a unique fashion – from red couches to tiny trinkets and elegant tablecloths. The smell of pork chops, macaroni and cheese, and asparagus seeped through every part of the home. Deviled eggs and cream cheese olives were even served upon arrival.

They even escort people inside their home. The kindness of Dalton Dean and his grandmother, Pasty Baker, was charming. But watching the two interact with each other after football games on Friday nights was even more eye-catching.

They even finish each other’s sentences.

Baker is there indeed. She’s grandmother, mom and dad all in one, Baker said. When Dalton Dean was nominated for homecoming court this year, she walked him down the track. Then, on senior night, it was Baker and Dalton Dean’s former football coach, Scott McDaniel who led the player down the field.

“That was so wonderful. It was such a privilege (to escort him on homecoming). And for him to hold my arm properly, that was so important. He does things properly… He’s a bright and shining star in my life,” Baker said. 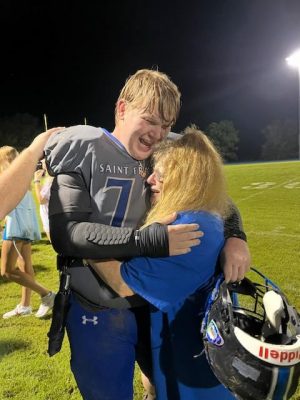 Dalton Dean’s character as a player and person

Life hasn’t always looked normal for Dalton Dean, but growing up under his grandmother’s wing is what he knows and loves. About 10 years ago, Baker started taking care of him full-time when his parents separated. Dalton Dean’s mother went on to be a traveling nurse and sailor, and his father, Arvie Dean, is a truck owner-operator who travels cross-country making long trips to provide for the two at home. Being able to come home is rare, but special.

“When I get to go home… It’s like Christmas,” Arvie Dean said.

“That’s what it’s all about, I mean I skimp on the road a lot to save money so that when I get home we go fishing, (and) we go out to eat. We get to do things, not just sit at the house. You know, they’ve been sitting there waiting,” Arvie Dean said.

The young player looks up to his father in many ways. The two of them partner on their own business ventures, go on fishing trips together, and he even spends time with his dad on the road – assisting his truck driving when he can.

“Being that I’m a single parent, even though I do have my mother’s help – it (truck driving) has provided me with a great life, and to be able to take care of my family,” Arvie Dean said.

Perhaps most importantly, when Dalton Dean was in eighth grade, his father was the one that encouraged him to start playing football.

“I’d sit in my room – play guitars. I’d have fun doing all kinds of stuff, and he (Arvie Dean) was like -you’re getting older, you need to go out and try and play a sport or something like that,” Dalton Dean said. 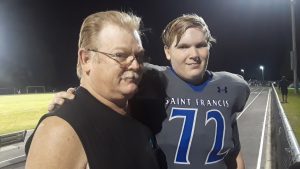 The player has fun on the field

For Dalton Dean, playing football was all fun and games until eighth grade when his former coach, Scott McDaniel recruited him. He trained during spring and summer camps and quickly learned the rules of the game. His height and size are attractive assets that not only propelled him into the sport but also make him an integral part of Saint Francis’ offensive and defensive line.

Dalton Dean came in as a freshman with practically no prior football experience. Fast forward four years, he plays a key part in multiple positions for Saint Francis’ football team.

As a team player, the running joke for Dalton Dean is that he is going to make a (literal) sandwich so that his QB will have time to eat it during a play. As funny as it sounds, that is just Dalton Dean’s character: funny and down-to-earth.

“The joke was basically, I was hoping the line would hold long enough,” Dalton Dean said. “ (So) I’m making one of my quarterbacks a sandwich so he can eat it in the backfield while I’m blocking people.”

What’s more to his size and character as a player is his attitude toward his grandmother. He’s a “southern gentleman” as Baker says, and even as a growing teenager, he never takes his relationship with her for granted.

“It means about the world to me to have her here and to be a part of everything that I do. If it wasn’t for her and just being able to wash some clothes every once in a while or do something simple for me…”

“Every once in a while?” Baker said.

“Dalton and I are pretty close. We talk. We kind of talk to each other and help solve each other’s problems, and even here (at home) he’s the one that helps me, and he doesn’t have much time but when the troops are down and I’m panicking, he comes and helps,” said Baker. “He thinks I’m a crazy old grandma!”

On top of helping grandma when he can, Dalton Dean manages to succeed as a full-time high school student and owner of his own lawn-mowing business. 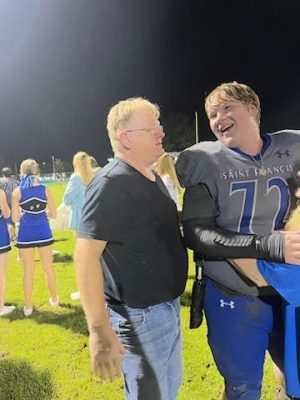 With Dalton Dean preparing for college, Baker will also prepare to live without him at home. She is ready to live out some of her own dreams, too, however.

As for Dalton Dean, his dream is to attend the University of Florida to play football. When asked what he can bring to a team of that level, his passion for the game took over in his words.

“I can bring, at the very least, showing up everyday. If you’re not there everyday then whats the point of having a football team? I learned that from my grandfather.”

Playing for a team of that level may not be easy, but a few of the things Dalton Dean’s father stresses to his children are to love what you do and to never give up.

“What I’ve always tried to teach my boys is: never give up, always strive for the best, don’t settle for seconds, and basically just because I have to be out on the road. I told them, you know, anything worth having in this world is worth working for,” Arvie Dean said.