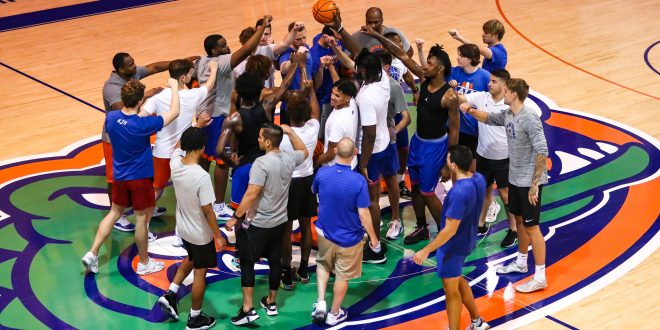 Gator basketball is back in action this week after both the men and women’s teams were victorious in their first games on Monday.

The Golden era is off to a good start at Florida. New head coach Todd Golden had his first win for the Gators on Monday against Stony Brook.

Florida took care of business at the O’Connell Center, sending Stony Brook home with an 81-45 loss. The Gators had three players score in double digits in the win.

First, was forward Colin Castleton, who started his third year at Florida strong with 13 points, five rebounds and four blocks.

After the win, the celebration began for Golden and the team.

After a memorable first night, the men’s team takes the floor again this Friday against Kennesaw State at 7 p.m. The game will be at home in the Stephen C. O’Connell Center. Both teams are 1-0 to the start off the season.

The Gators women’s basketball team is off to a hot start to its 2022-2023 season after routing Florida A&M for its first win.

They came out of the gates strong against Florida A&M. Florida had four players in double digits and played aggressive defense. The team totaled 18 steals on the night, scoring 28 points off A&M turnovers.

Senior guard Leilani Correa led the team in scoring with 18 points on 55% shooting, three three-pointers and four steals. Correa just transferred from St John’s and showed she can contribute immediately.

Another big performance on the night was from another new gator; senior guard Kirsten Deans put up 15 points and five assists with three steals on the night.

The Gators filled up the stat sheet all night, leading to an 83-55 victory on night one.

Florida’s next game will come on Sunday against UNC Asheville at 2 p.m. This will be the Gators’ last home game before they head on the road to face Florida State.

The Tennessee Volunteers travel to face the Vanderbilt Commodores in an SEC matchup Wednesday night. …