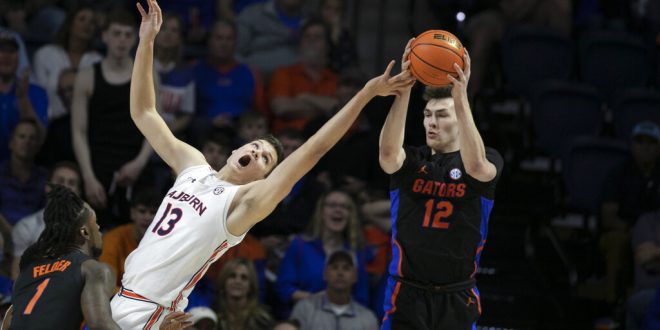 The Gator men’s basketball team (2-1) suffers its first loss of the season to the FAU Owls (2-1). The Owls defeated the Gators 76-74 in Gainesville on Monday night.  Colin Castleton’s second straight 30-point game wasn’t enough to overcome the Owl’s 13 three-pointers on the night.

The Gators didn’t have the best of nights when it came to scoring the ball. Guard Kyle Lofton opened up the game strong for the Gators, scoring nine points in the first half. He seemed to be one of the only players on the team to find their shot. In the first half, Florida was 11 of 35 from the field and shot 3 of 8 from three. They missed numerous open layups that led to turnovers and Owl points.

On the other hand, Colin Castleton was terrific yet again. He recorded his second straight 30-point game of the season. Castleton was dominant in the paint and has shown that he is unstoppable when coming off the pick and roll with Lofton. He even knocked down a three in the opening minutes.

The Gators may need better offensive production from their bench if they want win these types of close games. The bench scored a total of five points on the night while the Owls got 34 points from their reserves.

15:42 left in the 2nd half.@GatorsMBK regain the lead over @FAUMBB 48-39@Castleton_ scores 6 straight points to give the #Gators some much needed momentum.#ChompChomp pic.twitter.com/aRFsNlMwD1

In the first half alone, FAU shot 8 of 13 from the floor from distance.  Their starters and bench players were all hot. Johnell Davis and Michael Forrest both hit four 3’s for the Owls. They defended Florida well and turned their fast break opportunities into points. Not only did FAU have a hot hand, but many of their looks were uncontested. The Gator transition defense seemed lacking at times.

After the game, Gator coach Todd Golden praised the Owls for their ability to shoot the ball and find the open man. Florida struggled with getting back on defense and closing out on the open shooters.

When the game came down to the wire, the Owls were prepared. They hit two clutch free throws and left the Gators with less than a second to get a shot up.

Next up for the Gators

The Gators will have their first road game of the season this week. They travel to Tallahassee to take on the Seminoles on Friday night. They’ll look to bounce back against a winless FSU team.