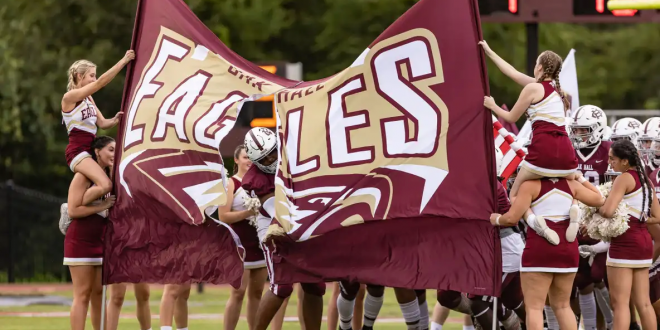 The Undefeated Eagles: A Recap of Oak Hall’s Winning Regular-Season

Many great things can be taken away from the 2022 football season for Oak Hall High School Eagles. In his second year, sophomore quarterback, Dakota Brower, led his team to an undefeated regular season, making students and fans excited to see how the young talent develops for years to come.

The team started hot in its season debut against St. Joseph’s with an early touchdown by sophomore running back, Briggs Copeland. The rest of the game proved to be a defensive battle between the two teams with no scores coming from either. Though the Eagles won with a slim 6-0 advantage, credit must be given to Copeland for his 80-yard performance.

In his second game, Brower began to settle into his own in the backfield. Oak Hall led 13-6 after the first quarter with Brower throwing his first touchdown of the season. The Eagles ran away with the game in the second quarter, putting up an impressive 29 points.

The score was 35-6 at halftime, heavily favoring Oak Hall. The game slowed down in the second half with another seven points from Oak Hall and six points from Bishop Snyder, rounding up a final score of 49-12.

The Eagles found themselves in Lecanto to battle the Warriors. Brower’s performance ceased to match that of his previous game, yet he still ended with 108 yards and two touchdowns. The real magic came with the thrilling 109-yard, four-touchdown game from Copeland.

Copeland had been shaping up a very productive season out of the backfield, being the main source of points for the Eagles up to Game 3. Sophomore receiver Mike Peterson Jr. was also a productive asset to the Eagles with 91 yards and a touchdown.

Brower threw for a season-high 158 yards and a touchdown in this conference battle against the Warriors. Oak Hall racked up 21 points after the first half with a solid performance from senior tight end, Dylan Provencher. With no surprise, Copeland had a breakout performance of 169 yards and three touchdowns. The shutout defense was led by junior linebacker Abram Jerkins ending his night with six total tackles.

In another decisive victory, the Eagles outdid their opponent in every area. Brower threw for 118 yards and three touchdowns with an outstanding 71% completion rate. Peterson Jr. and Copeland also led the Eagles offensively with a pair of touchdowns each.

Defensively, the Eagles totaled 45 tackles as compared to the opponent’s 27, with stand-outs Aidan and Abrahms Jerkins ending with a combined 11 tackles.

The Oak Hall Eagles crushed the Harvest Community Warriors in every quarter of this win. While the Eagles’ passing game may not have been on, it did not matter, with a rushing touchdown from Brower and three from Abram Jerkins.

Oak Hall nearly doubled HC’s total yardage at 301 yards and matched this energy on defense, ending with a team total of six sacks. It was clear the Warriors were no match for the Eagles in every category of the game.

In their last regular-season game, the Eagles brought both offensive and defensive momentum from previous games. Brower threw for 87 yards, including a touchdown and rushed for 106 yards and another touchdown.

Defensively, the Eagles totaled 54 tackles, with a season-high 10 tackles from junior Jake Quigley.

The Oak Hall Eagles looked to continue their winning season in the playoffs, but unfortunately for them, their season was ended by the CFCA Eagles. Oak Hall scored only one touchdown during the game and was quickly discouraged with a halftime score of 43-6.

Oak Hall only totaled 185 yards compared to its opponent’s whopping 618 yards. Though this game was a disappointing end to the season, it does not discredit all of the accomplishments the team had throughout the season.

Next year, the Oak Hall Eagles will look to have another winning season and carry that momentum into the postseason.