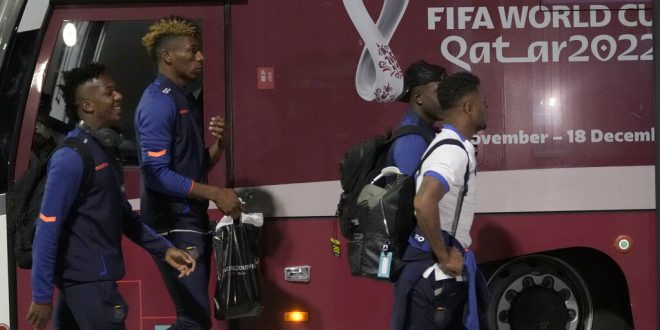 Members of Ecuador's national soccer team arrive at Hamad International Airport in Doha, Qatar, Wednesday, Nov. 16, 2022, ahead of the upcoming World Cup. Ecuador will play the opening match in the World Cup against Qatar on Nov. 20. (AP Photo/Hassan Ammar)

Qatar’s World Cup will feature a plethora of nations contending for international soccer’s ultimate prize. While many assume the tournament’s favorites are a foregone conclusion, the World Cup is the perfect stage for an upset.

Group A will kick off December’s World Cup when Qatar hosts Ecuador this Sunday. While Group A lacks tournament favorites, it is full of contending teams pushing to make a statement in Qatar. These squads feature young players jostling to prove themselves and veterans hoping to take home the World Cup Trophy.

Ecuador snuck into the World Cup, finishing fourth in CONMEBOL qualifiers. The South American nation was fairly even throughout qualifiers, going 7-5-6. Ecuador was one of four CONMEBOL squads with a positive goal differential, putting itself in company with tournament favorites Brazil and Argentina – and Colombia, who missed the tournament. The South American side surprised throughout qualifiers.

This is not to say the South Americans do not deserve to be there: Ecuador has a solid squad, headlined mostly by great MLS players like LAFC’s José Cifuentes. Brighton’s Moisés Caicedo should headline the Ecuadorian squad and a possible breakout player of the tournament. The midfielder has been on many major clubs’ radars recently and should soon become a household name.

While Ecuador has weaknesses up top and between the posts, it should put on a strong showing in Group A.

The Dutch are favorites to win Group A. Louis van Gaal’s side won its group in UEFA World Cup Qualifiers, having won seven of 10 qualifying matches with a +25 goal differential. Netherlands also won its most recent Nations League match, beating Belgium 1-0.

Van Gaal’s side typically deploys a 5-2-1-2 formation, playing its outfield players narrowly and allowing the wingbacks to cross the ball in from wide spaces. This creates a stern defensive structure that can also create numerous scoring chances throughout a match.

Netherlands features one of the best – and deepest – backlines in international soccer. Superstars Virgil van Dijk and Matthijs de Ligt headline the defense and will be assisted by Jurriën Timber, Nathan Aké, Stefan de Vrij and Daley Blind all fighting for the last centerback spot. These defenders will likely rotate but van Dijk and de Ligt should start every match.

The midfield also features star power, particularly with Barcelona midfielder Frenkie de Jong. De Jong will be one of two defensive midfielders employed by the Dutch. Rising star Cody Gakpo figures to take up the attacking midfield spot, with Memphis Depay likely to play up top with another striker.

This Dutch side will be hard to beat, or steal any points from for that matter.

Qatar being the host nation does not mean it will get out of its group. In fact, Qatar is unlikely to even contend in this group.

Qatar won an incredibly weak group in AFC World Cup Qualifiers. Although it had an automatic bid, it still contended for its spot. Qatar captured 22 points from eight matches, with a +17 goal differential. The second-best team was Oman with 18 points, and the group also featured India, Afghanistan and Bangladesh. These nations are not exactly soccer superpowers.

Qatar does not have a single player who plays in a top-5 league. Head coach Félix Sánchez faces the tough task of contending with a heavily outmatched squad.

Senegal would have been favorites to finish second before Sadio Mané’s injury. Now the Senegalese squad faces a much tougher challenge without its brightest star for the majority of the group stage.

This is not to say Senegal is helpless without Mané. The Senegalese squad is a strong one, as it was last year’s AFCON. The strongest African team features a squad behind the Bayern Munich star. Two Chelsea players, Édouard Mendy and Kalidou Koulibaly, feature for Senegal at goalkeeper and centerback, respectively. Other key players, like Everton’s Idrissa Gueye, round out the rest of the roster.

Mané’s injury should not derail this team too much. Senegal should still finish second in Group A.

Connor O'Bryan is a world soccer reporter for ESPN Gainesville. He also sometimes covers baseball and other sports. He has previously written for WUFT Gainesville and for Atrium Magazine. Connor also cohosts the "Off The Bar Podcast", a student driven podcast that focuses on the global soccer landscape.
@ConnorOBryan3
Previous The Undefeated Eagles: A Recap of Oak Hall’s Winning Regular-Season
Next Lightning Top Stars In OT Thriller