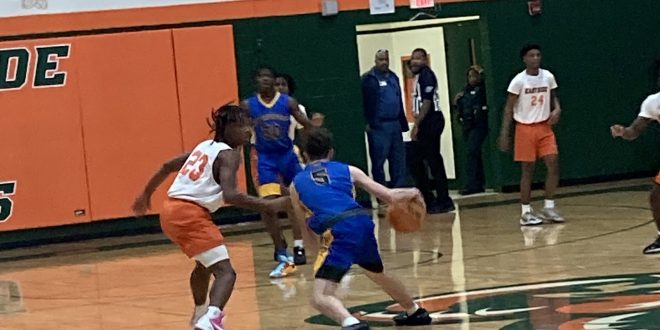 In the final game of the Tip-Off Classic, hosts Eastside and visiting Newberry provided the most entertaining game of the night. A fast start gave Newberry the early lead, and they took a double-digit lead in the second quarter. Eastside, however, showed fantastic fight and came all the way back to take the lead early in the fourth quarter. The atmosphere was electric, but it was the visiting Panthers who shut the crowd up with a nearly flawless fourth quarter. When the clock hit triple zeros, Newberry emerged victorious by a score of 63-56.

Newberry pulls away in the fourth to win 63-56. @RowdyEHSRams fought hard but comes up short in the end. That’s all from the Tip-Off Classic! Your night two winners: PK Yonge, Santa Fe, and Newberry. Recaps for all three games will be up on @ESPNGainesville pic.twitter.com/Ty9Ma7MOjG

Newberry’s winning effort was spearheaded by standout guard Mike Moore, who finished with a game-high 21 points. Bryan Eastman also finished in double-digits, scoring 11. Other important contributors were Juwan Sipio and Mason Smith. Newberry was arguably the best team at the showcase, as they put together a complete performance against a scrappy Eastside team. The Panthers put up a whopping 25 points in the fourth quarter and locked Eastside’s offense up late to solidify their win.

An awesome third quarter comes to an end. Action up and down the court. Newberry still leads, but @RowdyEHSRams have cut the lead down to four. 38-34 Panthers @ESPNGainesville pic.twitter.com/cpUMUmJMiy

The Rams should feel encouraged after their performance. They fought hard and had an extraordinarily impressive comeback spurred by Kelvin Baker (12 points) and Shelton Hall (11 points). Jarrell Comer and Bryan Hayes were also instrumental in the team’s effort, as they both had big performances at both ends of the floor. If and when the Rams figure out their three-point shooting and get more contribution from their bench, they will have a squad that can be very competitive this year.

Newberry will host Chiefland in their next game on December first. Eastside will take on Trinity Catholic in another early season tournament on November 26.