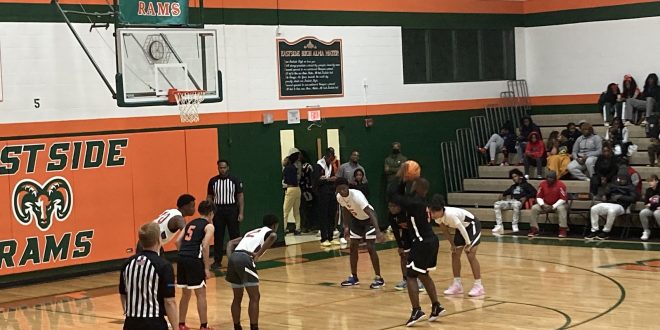 Hawthorne fought hard in the first half, but eventually Sant Fe’s size and athleticism won this game. The Raiders finished off the Hornets by a score of 72-40. The Raiders moved the ball brilliantly and seemingly couldn’t miss from the field, as they played a fantastic second half of basketball to secure the win. The Hornets played well in spurts but just couldn’t keep up after competing for a half.

Santa Fe takes care of business. An impressive offensive performance sees the Raiders put up over 70. Recap up later on @ESPNGainesville. Up next, @RowdyEHSRams takes on Newberry in the nightcap of the Tip-Off Classic. pic.twitter.com/ftyVvz885x

Santa Fe’s point guard, Makhai Lewis, was fantastic. He led the way offensively, with 10 points and a handful of assists. Kyren Washington and Jamarion Ross, Santa Fe’s big-man duo, got theirs tonight. The pair combined for double-digit points (including a rim-rattling slam from Washington) and rebounds, and over five blocks.

Another player worth mentioning is guard Jameil Watson. He had 10 points, but his athleticism was the most impressive part of his performance. He outraced everyone on the court all game and had an electrifying pin block reminiscent of Lebron’s in the 2016 Finals. If you’re a Santa Fe Raider fan, you should be feeling good after this performance. All signs point to a fun season ahead, and this team feels very complete considering it’s so early in the season.

Hawthorne had some bright spots despite the blowout loss. Their senior point forward, Clayton Glosson, led all scorers with 23. His shooting from deep was fantastic, and he showed great discipline, managing to stay in for the entire game after picking up four fouls in the first half alone.

Karell Pope was also very good, as he put forth an effort any coach would drool over. The undersized guard drew four charges and had three steals while only picking up three fouls all game. Combine those numbers with his efficient shooting and passing, and he had a stat line that would make Wisconsin grad Brad Davison proud. Jhalon Walker was also good at times, drawing lots of fouls and finishing some tough drives.

However, he did lose the ball in the lane too often, a theme consistent throughout the team. Ball security is something this Hornet team is going to have to work on this season. Overall, Hawthorne put forth a solid effort, especially for such a small team. They have no centers or power forwards, which could be an issue throughout the year as they face teams with size similar to Santa Fe’s.

Santa Fe will travel to Live Oak to take on Suwannee on December sixth and will hope to take their smoking hot offense with them. Hawthorne will look to rebound at the Kingdom of the Sun tournament at Vanguard High School on November 27th. They don’t yet know their first opponent.