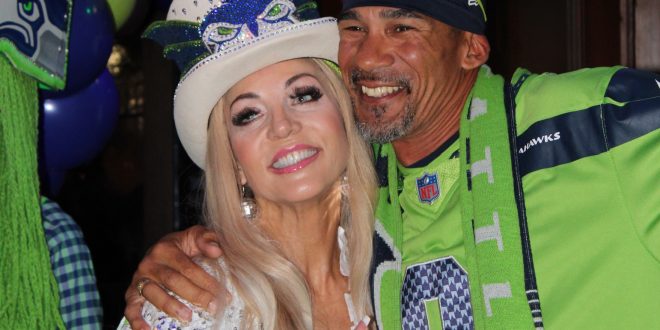 It is the night before the Seattle Seahawks and Tampa Bay Buccaneers go head-to-head at Bayern Munich’s Stadium, Allianz Arena. The line outside the Schneider Bräuhaus for the German Sea Hawkers Heimspiel (home-play) Party made several loops to the entrance. Die-hard Seahawks fans and members of the fan club waited patiently to enter. It was cold, misty and dark, but the scene was lively.

Fans shared their pride for the neon green and navy blue as they cued a “Marco-Polo” style cheer of “Sea-Hawks” back and forth several times. The long wait was nothing compared to the fact that the German Sea Hawkers club members and fans had waited their entire lives to welcome their favorite team “home.”

Among fans in that line was Samantha Mangan, secretary of the original Sea Hawkers chapter in Southwest Washington. Mangan and her husband had over 453,000 people in front of them when trying to purchase their tickets for the game several months ago. The experience was part of their honeymoon.

“We did notice how many people came out to this event. It’s cool because it’s the only sponsored (NFL) fan group in Germany,” Mangan said.

That is what Maximilian Länge, founder of the German Sea Hawkers chapter hoped for when he coordinated the event months ago. He arrived on Monday from his hometown of Leipzig, almost 300 miles north of Munich, to begin setting up for this special event.

“It’s been a crazy week,” Länge said. “Starting Wednesday, you could see the streets just filling up, and especially with Seahawks fans. It was very cool especially because we are considering this a home game for ourselves.”

The event sold out at over 900 attendees, not including media members. It was a clear reflection of the fact that the Seahawks have one of the most prominent NFL fanbases in Germany. Although the NFL considered this event a Buccaneers home game, the streets had significantly more people dressed in blue and green.

Why the Seahawks in Germany?

The early 2000s was prime time for the Seahawks as globalizing efforts by the NFL were in full swing, and a German television program called ProSieben Maxx provided Germans with access to watch the NFL. The channel aired limited regular season coverage until eventually showing playoff matches, too.

The Seahawks made several playoff appearances and won the Super Bowl in 2014. The parallels to the club forming in that same year over in Germany are no coincidence. It was easy for those in other countries to pick their favorite teams based on how prominent they were in the U.S.

The German Sea Hawkers are an affiliate chapter of the Seattle Sea Hawkers based in Southwest Washington. The original chapter sprang up in 1976 as a booster club for the NFL team. For many years, the Sea Hawkers held tight relations with the players by making meals and dinners for them, providing child-care for players and/or their wives, and even hosting events with players to raise money for charity.

Now, there are a total of 42 chapters around the world, each representing a different charity and donating to those causes each year. The original Sea Hawkers supports Bridge the Gap, a non-profit organization that aims to enhance the lives of abused and neglected children.

The Sea Hawkers’ long history with the Seahawks as an NFL team has also aided in their efforts to help greater causes. Each year, a former Seahawks player attends the annual charity dinner, and the Seahawks organization donates items to auction off, including signed helmets. The money paid for those items is always donated to charity.

Länge formed the German club in 2014. Before loving the Seahawks though, he became an American football fan after watching his first game in person as an exchange student at the University of Oregon. Following college football, he started watching the NFL. The “Legion of Doom” era starting in 2011 propelled his love for the Seahawks.

When the New England Patriots played the St. Louis Rams in London in 2012, Länge attended the game wearing a Marshawn Lynch jersey. Another Seahawks fan approached him and asked if he wanted to join the U.K. Sea Hawkers chapter.

“I was like, ok, I’ve never heard of any European Seahawks fan club in general, so yeah, let me join,” Länge said.

When the Seahawks won the Super Bowl in 2014, Länge couldn’t help himself.

“I ended up founding it after the Seahawks won the Superbowl because the hype was so big in Germany,” Länge said.

Now, more than 1,800 German Sea Hawkers make up the fan club. They host an annual meeting once a year. And, on Sundays throughout Germany, different groups of club members enjoy getting together to celebrate their favorite team no matter what the time difference is.

Along with Länge and other Germans who love the Seahawks, American football fascinates them the most. The German club enjoys their own versions of tailgating, having watch parties, and enjoying a day, or an all-nighter on the couch considering the significant time difference.

“They (German fans) enjoy the American lifestyle of American football, because they want to be at a tailgate, experience what it’s like to go to a game, and have a party before the game in the parking lot,” Länge said. “That’s a lot of what people are curious about.”

The line outside was a party itself, but after hours of waiting, fans could enjoy their time together inside the Schneider Bräuhaus. The green ambiance set the scene. Even Blitz, the Seahawks mascot made an appearance.

Stefan Vollmet, a Seahawks fan who led the “Marco-Polo” style chant outside of the beer house danced around with excitement.

“I have a photo with the Blitz,” said Vollmet. “I love the Seahawks. Not Seahawks (fan)? Get out!”

Traditional German food was served throughout the venue, and people sat together enjoying one another’s presence. The music was loud, people danced, and smiles filled the room.

Niklas Juettner, a Seahawks fan from Berlin spoke for many other fans when talking about this opportunity.

“It was an expensive decision because of the tickets, but I didn’t want to miss this opportunity,” Juettner said. “You don’t know when the Seahawks would come back to Munich or Germany.”

While the American aspect of football is what Länge said fascinates him the most. One thing he was also excited for was to bring a taste of Germany to this very American experience.

“A lot of us German Sea Hawkers have been welcomed so warmly to Seattle. They have invited us to their tailgates, to their parties, to drink the beer with them,” Länge said. “Now it’s our turn, to invite these guys and just show them how welcoming we are and how excited we are about the game and show them that everyone’s welcome.”

Previous FEATURE: A Piece of Home
Next Rimdal Leads Florida Women’s Basketball to Win Over Furman