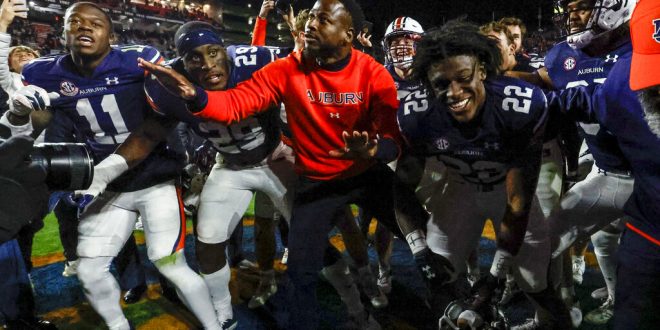 Auburn interim head coach Carnell Williams, center, celebrates with team after a win over Western Kentucky during the second half of an NCAA college football game, Saturday, Nov. 19, 2022, in Auburn, Ala. (AP Photo/Butch Dill)

After an incredible college career for former Florida Gator Ike Hilliard, the wide receiver is now coaching in the SEC at Auburn. He is in his first year as the wide receiving coach and has helped the Tigers win five games this year after being hired in February.

During his college career at the University of Florida, he recorded 126 catches for 2,214 yards and 26 touchdowns. He was also a member of the first National Championship team. He shined in the Sugar Bowl, with seven catches for 150 yards and three touchdowns.

He was then drafted No. 7 overall in the 1997 NFL draft and spent 12 seasons in the NFL playing for the New York Giants and Tampa Bay Buccaneers. He had over 6,300 yards and scored 35 touchdowns, playing in the Super Bowl in 2000. During his time on the field, Hilliard said he realized he wanted to get into coaching after learning from Sean Payton as a player.

Hilliard began his coaching career with the Florida Tuskers. He then coached in the NFL with the Miami Dolphins, Buffalo Bills, Washington Redskins and Pittsburgh Steelers.

Despite head coach Bryan Harsin’s firing, Hilliard succeeded with his wide receivers and has built a relationship with the interim coach Cadillac Williams.

Auburn’s next game will be against Alabama on Saturday, Nov. 26, in the Iron Bowl. The Tigers are 5-6 this year but have only two wins in SEC play. They are not yet qualified for a post-season game appearance, but a win over Bama will secure their extended season. This will be Hilliard’s first chance to coach in this historic rivalry game.

Previous FEATURE: The Atmosphere of a Lifetime in Munich
Next England and Netherlands Start World Cup With Wins; Team USA Picks Up a Point in Draw