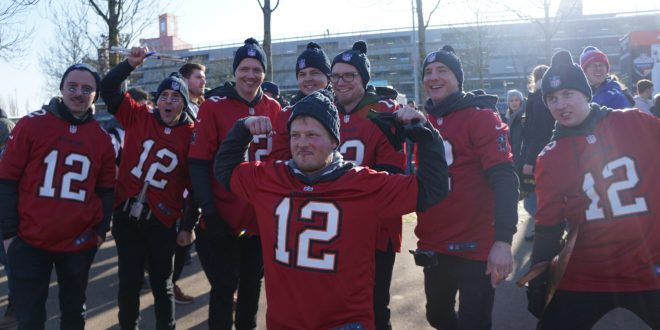 Die-hard Tampa Bay Buccaneer fans party in the lead-up to the first-ever game in Munich, Germany.

A game day unlike any other. Munich showed up to capture a true game-day experience when the Tampa Bay Bucs played the Seattle Seahawks in Germany’s first NFL game.

The sounds of beer mugs clinging to bratwursts sizzling formed one of the most magical experiences a football fan could endure.

“That was spectacular,” said Tampa Bay star Tom Brady to NBC’s Peter King following the game. “I mean, that stadium was rocking. The crowd singing ‘Country Roads’ and ‘Sweet Caroline,’ it felt like it was a Red Sox game out there. It was amazing, the whole experience.”

The fans came in big numbers. They flooded the train stations with eagerness to reach the iconic Allianz Arena, home of Bayern Munich.

Once there, different small events hosted by the NFL and other football-themed interaction experiences greeted fans. Of course, with a German twist, fans were walking around holding sausages and other local foods rather than the traditional burgers and hot dogs.

“The mix of German food and American football is something that just cannot be beaten,” said a group of die-hard Buccaneers fans.

Walking through the scene outside of the stadium it was impossible to not stare in awe. How football brought people from so many different cultures together was mesmerizing. Looking through the crowd for just five minutes, you could find a representative from all 32 NFL teams.

“Most people here are not fans of either the Seahawks or Buccaneers,” said Stefan Schmidt, a Munich local and Baltimore Ravens fan. “The people here in Germany want to come and support the game of football and the competition.”

An enlightening experience, proving the aura revolving around the anticipation for the game gathered people with varied backgrounds. Amidst all the differences and problems in the world, the game of football brought people from all over together in unison to support something they all share a love for.

Following the tailgate extravaganza, fans began the great migration to Allianz. On the way, life-size helmets from all 32 NFL teams greeted them. Highlighted by kids smiling inside of the life-size helmets and adults posing next to teams they have idolized sometimes since they were children.

The game kicked off, along with the drinking and socializing of locals in Germany.

Leading up, many people around the city said it is usually hard to find places to watch NFL games.

“The time [difference] and demand of people and businesses make it unrealistic and hard to watch all the games every Sunday,” said Ida Shulz, a Munich local. “My husband occasionally will watch a game, but never consistently.”

This was not a problem with the 3:30 local kickoff time. Restaurants and bars filled to the brim. Avid football fans ready to witness history in the making: the first-ever regular season NFL game in Germany.

Inside the bars, the scent of freshly-made pretzels and the sounds of fans chanting welcomed newcomers. With the exception of a table of Tampa and Seattle fans, the bar was engulfed by the next play, regardless of the outcome. They wanted the excitement.

“It is hard to know which team they are rooting for,” noted Matt Quartararo, a UF student who traveled to Munich. “They cheer at everything, regardless of team.”

Bringing such high energy and love to such a diverse group of people revived the thought of football. Many of the fans were there for the camaraderie and love of the game, regardless of the outcome.

The fans were treated to a great game with Tom Brady,  a world super-star, leading the Buccaneers to a win over the Seahawks despite Seattle’s valiant comeback effort.

In truly a once-in-a-lifetime experience, Munich lived up to the hype. The streets and stores were full of NFL merchandise. Different talk shows were set up around the city. The anticipation of a game that could change the scope of the NFL for years to come was palpable.

In a time when a lot of the world has disagreements, seeing people come people together for their underlying love of the game was encouraging.

A third-year journalism student with a focus in sports and media.
@kylecurtisss
Previous FEATURE: How did the NFL end up in Germany?
Next Former Florida Gator National Champion Ike Hilliard Back Coaching in SEC with Auburn